Technician for the power grid on ES-06 (formerly)

Counting and burying the bodies of innocents (formerly)

He is the main protagonist of the SCP-5000's story.

When he was kid, Pietro Wilson had weak health most of the time and didn't hang out often. He was very invested in detective cases. When his father's row of plant-pots on the wall outside the house kept mysteriously knocking over, this became a bit of an obsession to young Pietro and so be bought a spy camera to discover that a stray cat was the one doing it. Pietro later came to regret this discovery as his father kicked the cat to death, and apparently Pietro always had a strained relationship with him.

A now adult Pietro later became a technician for the SCP Foundation at ES-06 within a Exclusionary Site, sites that are protected by time and reality shifting anomalies. However, on the 2 January of 2020, MTF Zeta-19 came to the site where Pietro resided and proceeded to kill everyone on the site. Pietro managed to evade their initial attack and thankfully found a prototype of the Absolute Exclusion Harness which made the MTF unable to see him.

Pietro proceeded to leave the site and go to a Foundation safe-house after travelling for hours through a desert on foot, to find out what happened, thinking that the MTF must have been Chaos Insurgency infiltrators. But to his shock instead he found out that the SCP Foundation came public and had declared war on the entire human race, followed by the release of several destructive SCPs such as SCP-096 and the Internet being taken down.

Refusing to stay in the safe-house and do nothing, while all of this went on, Pietro decided to go to the nearest Foundation site, Site-19 to find answers. While on the road, he came a across MTF Epsilon-6 doing a "pain" check which involved stabbing the soldiers to see if there was any reaction. Only one showed signs of pain when he was stabbed, to which the commander doing the check ordered the others to shoot the poor soldier. Pietro went and scavenged basic weaponry and medical supplies from the corpse. He then got a transmission from an old radio speaking through someone's voice some words which seemed like gibberish, but then he realised that the radio was almost completely broken. This was actually an hallucination from an unknown entity telling Pietro in his own voice about SCP-579 and the events on Ganzir.

Pietro went through the woods in order to avoid vehicles from bumping into him and questioned himself on why he was really doing it besides wanting answers. After arriving at the site, he found it easy to enter since security was in disrepair, and found personnel working and talking on how to get maximum human casualties much to his horror, and noticed that their eyes were like dead and inhumane.

He was able to steal a Senior Staff credentials and access their database where he discovered that on December 16 2019, the O5 Council initiated project 'PNEUMA', which similar to 'KALEIDOSCOPE', involved the mass-amnesticiation of Senior Staff and affect the collective human unconsciousness, or the psychospace. However, in the ensuing days something happened, after the O5 Council and the Ethics Committee had some voting, and several employees committed suicide or resigned, which also included Dr. Gears. Then a number of unknown files were sent to Senior staff and Site Directors, which included the message 'Harden your Hearts' causing the suicides and resignations to suddenly cease. After that they proceeded to terminate the human and human-sympathetic SCPs, before dispatching several MTFs to execute personnel in Exclusionary Sites. Following that the Foundation declared war.

After learning about the other SCPs the Foundation was using to exterminate humanity, Pietro tried to investigate more, but it is unknown what happened, even to Pietro himself.

After three months, Pietro realised that a lot of time had passed which during that time he somehow got scars, a bandage wrapped around his temple, and files have been deleted, while his suit seemingly had no damage, but he had no knowledge of what had happened. He also found in his hand a suitcase containing something (SCP-055) and had a mysterious urge to deliver it to SCP-579.

During his journey, he found it more difficult to go to the site containing SCP-579 than Site-19. He stopped counting the numerous bodies he came across. Eventually, Pietro also gave up burying the bodies, after he touched the body of a boy and saw worms coming out of the boy's skin laughing with the boy's face.

On the road he found out that when he opened the suitcase, he would find himself miles away from where he last was. Unbeknownst to him, when he looked at 055, he would just forget that he had walked those miles. He also found a Foundation agent's laptop which had the latest information on what was going on, such the war between the Foundation and the GOC in Ganzir.

He then encountered some GOC soldiers and was able to access their database, where he discovered an audio recording of an interrogation between GOC operatives and a captured Foundation soldier which eventually ended in the destruction of Ganzir. Pietro kept going down the road, but making less progress when opening the suitcase, since the entity which was making Pietro move became weaker following the event of Ganzir, and thought why was he even going to 579.

After learning about other SCPs being used to attack humans, Pietro came across the Blinkers, metallic statues of MTF soldiers with empty eye sockets and blades for arms who could only move when not looked at (similar to SCP-173). Pietro's eyesight also affected them, causing the living statues to deduce that he was nearby. He then witnessed a strange humanoid entity where space around it stretched along with it to the sky, and black gaps were around it like wings, and was fighting some MTF soldiers. Unbeknownst again to Pietro, this entity was the reason why the Foundation declared war on humanity. This being was an ancient memetic malevolent entity which inhabited the collective human consciousness and was the cause of the negative aspects of humanity.

Pietro encountered Dr. Bright, while on his way and the two talked for a bit, but neither of them really knew why the Foundation went mad. Pietro finally managed to arrive at the abandoned Site-62C where 579 was held. As he entered the site, he felt like something was now forcing him to proceed, and felt he was threatened. This was the memetic entity who was using Pietro to bring 055 to 579 in order to stop the Foundation.

However, as Pietro was descending to the cell of 579, he came across one of the Blinkers which had figured out Pietro's presence and was slashing everything on sight thanks to the lights flickering. The Blinker managed to gouge one of Pietro's legs. Luckily Pietro managed to lock himself inside 579's observation chamber, but the only way to 579 was through a hole. Seeing no other way, Pietro fell inside the hole where he finally came into contact with 579, before dying from the impact. Then after 055 came into contact with 579, the entire reality was reset prior to the execution of project 'PNEUMA'. Pietro's corpse and suit was found by the personnel of the new timeline. Thanks to Pietro's sacrifice, the Foundation decommissioned the project, and the human race was saved.

The true appearance of Pietro Wilson is never revealed and there are no details about it.

Pietro Wilson was an ordinary human with no particular powers, but has shown to be somewhat capable of investigation to a lesser degree. With Absolute Exclusion Harness prototype Pietro was able to freely roam without being perceived due to the suit possessing anti-memetic properties. The suit also allowed Pietro to live for an extended period of time without food, water and sleep since it provided him the necessary nutrients to live for an undetermined amount of time.

Pietro was a man with morals and a sense of right with a desire for investigation, but he had very low self-esteem as he considered himself weak and a coward, and as the Foundation warred with the human race, he developed some sort of depression. Yet he was determined to find out why everything was happening and to do anything to help in this catastrophe.

Pietro Wilson appears as the main protagonist in the 120 page graphic novel adaptation of SCP-5000 WHY? by writer Tanhony, illustrated by artist DrDobermann and published by Discordia Publishing. 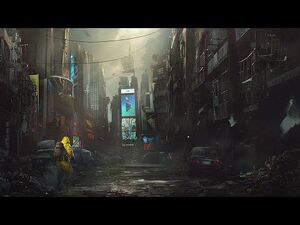 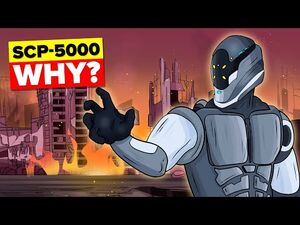 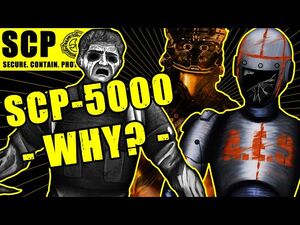