He was voiced by the late John Fiedler in all the original shorts all the way to Pooh's Heffalump Movie, and by Travis Oates and Nick Mohammad following Fiedler's death. He was also voiced by Phil Baron (who later voiced Teddy Ruxpin) in Welcome to Pooh Corner.

Piglet is introduced in the text from Chapter III of Winnie‑the‑Pooh, although he is shown earlier in one of the illustrations for Chapter II. He also appears in Chapters V to X, as well as every chapter of The House at Pooh Corner. He is best friends with Pooh and is also especially close to Christopher Robin and the rest of the main characters.

In the original color versions of Ernest H. Shepard's illustrations in the Winnie‑the‑Pooh books, has pale pink skin and a green jumper. He is smaller than most animals, being only slightly taller than Roo. His voice is described as "squeaky".

Piglet's adventures in the first book include hunting Woozles, attempting to capture Heffalumps, giving Eeyore a birthday balloon (popped), impersonating Roo in an attempt to trick Kanga, joining the Expotition to the North Pole, and being trapped by a flood. In the second book, he helps build a house for Eeyore, meets Tigger, finds Small while trapped in a gravel pit, plays Poohsticks, gets lost in the mist, and helps rescue Pooh and Owl after they are trapped in Owl's fallen house. For that last feat, Piglet is the subject of a seven-verse "Respectful Pooh Song" that Pooh composes for him. He can read and write, at least well enough for short notes.

In the illustrations for The House at Pooh Corner, it appears that spells his own name "Piglit", although it is rendered as "" in the actual text even when describing his signature. In one chapter, is referred to as "Henry Pootel" by Christopher Robin, who claimed to not recognize after he was thoroughly cleaned by Kanga. Eeyore likes to refer to him as "Little". Piglet's favorite food is acorns (or as the book often spells it, "haycorns"). At one point, he plants one just outside his house, in hopes of someday having a handy supply.

He lives in a house in a beech tree in the Hundred Acre Wood, next to a sign which says "TRESPASSERS W". An illustration shows that the sign is broken off after the "W." According to , that is "short for Trespassers Will, which is short for Trespassers William," which was the name of his grandfather. Later in The House at Pooh Corner, Eeyore mistakenly offers Piglet's house as a new home for Owl, after Owl's house had blown down. nobly agrees to let Owl have the house, at which point Pooh asks to live with him and accepts.

In 1960 HMV recorded a dramatised version with songs (music by Harold Fraser-Simson) of two episodes from The House at Pooh Corner (Chapters 2 and 8), with Penny Morrell as , which was released on a 45rpm EP.

He was originally omitted by Disney in the first Pooh film, Winnie the Pooh and the Honey Tree (1966). According to the film's director, Wolfgang Reitherman, he was replaced by Gopher, which was thought to have a more "folksy, all-American, grass-roots image". Many familiar with the classic Milne books protested Disney's decision to exclude him, and Disney relented. He appeared in the next Pooh film, Winnie the Pooh and the Blustery Day (1968).

Disney's interpretation of him has pink skin and a magenta jumper. His fears and nervousness are played up more, as he runs and hides when unnecessary and often stutters when nervous. He has a lot of hidden courage and often faces danger to help others, even when afraid. Stories about him tend to revolve around these traits as well as his small size.

In the Disney cartoons, he loves beautiful things like flowers, is very kindhearted, and is obsessed with keeping things neat and tidy. He sometimes has an inferiority complex, although his friends think highly of him. However, he is often left performing tasks better suited to someone bigger and stronger, such as in several episodes of The New Adventures of Winnie the Pooh or the 2011 film.

He can be found at the Walt Disney Parks and Resorts for meet and greets. He appears less frequently than Pooh, Tigger, and Eeyore, but more than Rabbit. also made a brief cameo in the 1988 movie Who Framed Roger Rabbit. He was featured as one of the guests in House of Mouse.

He appears in the 2018 live action film Christopher Robin where he, along with his friends, reunite with a now adult Christopher Robin. Unlike previous versions of the character who spoke with an American accent, this speaks with an English accent.

John Fiedler provided the voice for from 1968 until his death on June 25, 2005, except in "Welcome to Pooh Corner" where Phil Baron voiced him. Fiedler's last appearance as Piglet's voice was in Pooh's Heffalump Halloween Movie. He was the last living member of the original Winnie the Pooh voice cast.

Travis Oates has provided Piglet's voice since Fielder's death, including in Kingdom Hearts II and Pooh's Heffalump Halloween Movie (only for the newest material since much of the dialogue is still voiced by Fielder). His first major performance as Piglet was in My Friends Tigger & Pooh. He and Jim Cummings were the only actors to return for the 2011 film Winnie the Pooh.

In the 2018 film Christopher Robin, he is voiced by English actor Nick Mohammed.

In the Soviet Union, three Winnie‑the‑Pooh stories, (transcribed in Russian as "Vinni Pukh") (Russian language: Винни-Пух), were made into a celebrated trilogy of short films by Soyuzmultfilm (directed by Fyodor Khitruk) from 1969 to 1972. In all three films , renamed Pyatachok (Пятачок) and voiced by Iya Savvina, is Pooh's constant companion, even taking Christopher Robin's place in the story adapted from Chapter I (concerning Pooh and the honey tree). Unlike the Disney adaptations, the animators did not base their depictions of the characters on Shepard's illustrations, creating a different look.

The Te of was written by Benjamin Hoff following the publication of The Tao of Pooh. Both books feature the original drawing of E. H. Shepard. The Te of details 's exemplification of the Taoist concept of "virtue of the small." In 1982, whilst studying at Oxford University as an undergraduate, the columnist and commentator Andrew Sullivan adopted the persona of in holding office in the University Pooh Sticks Club as cited in the 1987 book "The Oxford Myth". 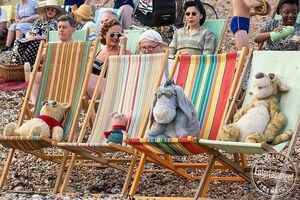 with Pooh, Eeyore and Tigger in Christopher Robin