Hunting monsters
Bringing objects or monsters to their onion

Titular Sidekicks / Warriors
The Pikmin are the titular main deuteragonists of the Pikmin video-game series. They are a sentient hybrid of plant and animal life-form. They are discovered by Olimar when his ship crash-lands on the planet in Pikmin. Pikmin come in a number of different colors, each indicating a unique set of attributes that better suit them to different environments.

The Pikmin are the species native to the distant planet that Olimar found himself on. The Pikmin are a strange hybrid of plant and animal that work like colonial insects. When Olimar found them, they were on the verge of extinction, being unable to defend themselves against the onslaught of beasts that they share the planet with. In a way, both Pikmin and Olimar developed a symbiosis with each other in order to survive.

The Pikmin are varied on how much the player can use them. Red Pikmin are associated with Fire, Yellow Pikmin with Electricity, Blue Pikmin with Water, Purples with nothing in particular, Whites with Poison (rendered as Darkness in Smash Bros), Rock/Grey Pikmin with Earth, and Flying/Pink with Air. Unusually, they cannot actively control their respective elements, but are immune to them instead (so Blues don't drown, Reds don't burn, Whites are immune to poisoning, etc). There have however been exceptions to this — White Pikmin, for instance, can poison enemies that eat them, while Yellow Pikmin in 3can redirect electrical currents. 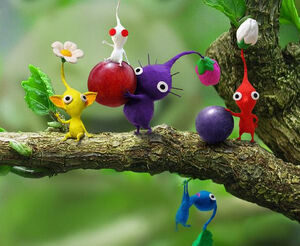 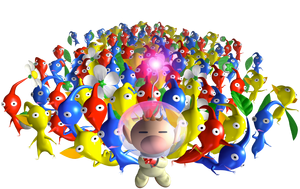