Playing with her brother Pingu

To play with Pingu and his friends

Kid Hero
Pinga is the tritagonist of the British/Swiss animated series Pingu. She is the daughter and youngest child of Mother and Father, the granddaughter of Grandfather and Pingu's little sister. She loves her big brother and always tags along when he is around. Although potty trained, she is not yet old enough to be fully independent and looks to her big brother to include her in his games and adventures.

Pinga lives in Antartica with her older brother Pingu and their parents and sometimes joins Pingu and his friends Robby the Seal and Pingo.

In Pingu in the City, Pinga and her family leave their igloo home and move to a city.

Pinga is a black, grey and white round penguin (an appearance similar to an emperor penguin chick) with orange feet and a red beak. Like Pingu, Pinga has the ability to turn into a ball for many purposes.

Pinga is a cute and pretty playful penguin. She always follows her big brother around and always likes to play with her toys and dolls, especially her little rabbit toy. She is also very sensitive and sometimes cries because of Pingu's unfair actions. 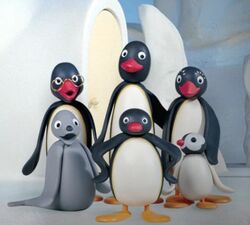 Pinga with her family and Robby. 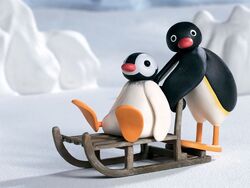 Pinga and her older brother Pingu
Add a photo to this gallery
Retrieved from "https://hero.fandom.com/wiki/Pinga?oldid=1852604"
Community content is available under CC-BY-SA unless otherwise noted.