Depends on what episode.

The Pink Panther diamond also appears in Return of the Pink Panther, and after that all of the film featured its name in their titles, whether the diamond appeared or not. The diamond did appear in "Trail of the Pink Panther", "Curse of the Pink Panther" and Martin films and Walt Disney Pictures. According to the Martin films and Walt Disney Pictures, which were supposed to be prequels, the diamond starts off in the possession of a sports coach who is murdered for it. It later lands up in the possession of a singer called Xania. The jewel is stolen again in the sequel by The Tornado, and once again recovered by Clouseau. In the original film, the diamond was given by the people of Lugash to their ruler as a sign of gratitude, and he in turn gave it to his daughter, Princess Dala. Clouseau correctly assumes that The Phantom will be after it, and tails Dala to a ski resort, waiting for The Phantom to strike.

Clouseau finally sets his trap at Dala's costume ball, where Lytton, The Phantom, shows up to steal it, as does his nephew, George. When both men (dressed as gorillas) find that the diamond already been stolen, they run for it and are arrested after a car chase. Dala turns out to have stolen the diamond herself to avoid deportation, but she is willing to part with it to save Lytton from prison, and she and Clouseau's wife frame Clouseau by planting the diamond on him.

The Pink Panther is often seen in episodes as a prankster, as he likes pulling pranks on the janitor whenever he's seen. He has a high level of curiosity, as he loves discovering and trying new things. He is shown to like hospital treatment more than other types and likes the habit of eating and for some reasons, going on a diet to lose weight when overweight. He is often shown to want things done his way, such as tampering with the Mona Lisa and painting a house that is supposed to be blue, going to opposites in both cases. He is also very sneaky, not using force to get what he wants, but rather depending on sneaky tricks to go about his goals.

The Pink Panther is has a crazy temper because of alarm clocks, radios, telephones, cuckoo clocks and other noises. causing him to get furious and smashing it to pieces. Then he gets once again angered when the radio sings a song, and cuts the rope. Then he gets enraged for the third time when the telephone rings and he throws it away.

Camouflage Mastery: The Pink Panther is an expert at blending into his surroundings and hide super quietly.

Shapeshifting: Even though it's rarely seen, the Pink Panther has the ability to shapeshift to match the surrounding he's in that can help him complement in whatever environment he's in.

Super Speed: In the Olympinks special, he's shown to outrun a train on skis.

Super Strength: As Super Pink, he was shown to easily a safe door open with his foot and crush a metal trash can with his own hands. 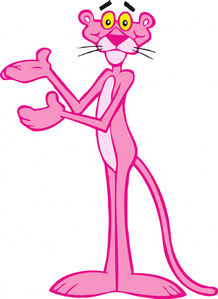 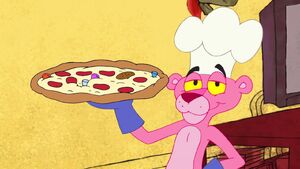