Pink Pearl (Formerly known as "White Pearl") is a character from the animated series Steven Universe. She was the original Pearl of Pink Diamond before she faked her death. She formerly belonged to White Diamond.

Pink Pearl wears an outfit similar to Pink Diamond, a ballerina-esque suit who bares her midriff exposing her gem, She also has pinkish skin and hair in the form of an odango or roses.

While controlled by White Diamond, Pink Pearl had white skin with her suit gaining some black and white patterns.

Pink Pearl showed so far was someone close to Pink Diamond, Presumably, she was maybe her first friend in Homeworld during her first days, After her death, however, she was later used by White Diamond as her personal voice speaker while under her mind powers, It was not until the events of “Change Your Mind", where she was finally freed from White’s influence.

Following her liberation from White Diamond's control, Pink Pearl kept making excuses for Pink Diamond, claiming she did not mean to crack Pink Pearl's eye and that she just happened to have been standing too close to her at that time. She is also friendly, never acting condescending towards Steven and Pearl and not holding Pink's actions and decisions against them. In spite of appearing fine to please them, the moment Steven displays a fit of destructive power similar to Pink, Pink Pearl cowers in distress. Eventually, Pearl manages to get Pink Pearl to admit that she was badly hurt. It was later revealed she never expected Pink Diamond to change at all.

Legs From Here to Homeworld

When Steven arrives at Homeworld with Blue and Yellow Diamond, as well as the Crystal Gems, White Pearl shows up and tells Steven that White Diamond wishes to see him, and empathizes that only Steven's presence is necessary. Once she has brought Steven to White Diamond, White Pearl disappears by phasing through a wall.

White Pearl appears at the beginning of the episode in one of Steven's dreams, where he is depicted as Pink Diamond. She is shown having a pink color scheme and an undamaged eye, revealing that she was once Pink Diamond's Pearl. She and Steven have fun together, hiding their friendship from Yellow Diamond, right before Pink Pearl begins to fade into darkness and White Diamond shows up in front of Steven.

Attending Steven's Era 3 ball later in the episode, White Pearl opts to observe the ball in White Diamond's place, standing on her throne. While smiling blankly for most of the event, White Pearl displays a disdainful frown when seeing Steven and Connie suddenly fuse, and observes Yellow Diamond poof the Crystal Gems and imprisons Steven and Connie in a prison tower.

Pink Pearl is mentioned at the beginning of the episode in another one of Steven's dreams, in which he is again depicted as Pink Diamond. Blue Diamond tells him that White Diamond was very unhappy with him and if he keeps up his misbehavior, she will take Pink Pearl away from him.

When Blue and Yellow Diamond attempt to help Steven and Connie return to Earth and let them get inside Pink's leg ship, White Pearl tells them they're not going anywhere and merges White's head ship with Pink's leg ship. She then tells Blue, Yellow, Steven, and Connie to go to their rooms, but Yellow and Blue's repaired arm ships, controlled by Bismuth, Lapis, and Peridot, suddenly appear and punch White's ship away. White Pearl reminds them that White Diamond has certain issues with their conduct before transporting herself inside White Diamond's ship.

Pink Pearl along with Yellow and Blue Pearl assist Steven in his Era 3 Rules For Dismantling the Empire. She is excited about the new Era and hopes that nothing goes wrong. When Yellow Pearl mentions the remaining two Light Prisms, and that Pyrope and Demantoid would not answer her attempts to reach them, Blue Pearl then suggests using force to which Steven quickly refuses. Pink Pearl asks Steven what to do and he and the Crystal Gems liberate the other Prisms from Pyrope and Demantoid.

Pink Pearl visits Steven's clinic for healing Gems. She tries to get him to heal her cracked eye, but he is unsuccessful. So, he tries to get Pearl to help them, and the three of them explore the Reef, where all Pearls (including Pearl and Pink Pearl) were created, so Pink Pearl's eye can be healed. In the meantime, Steven gives Pink Pearl the nickname Volleyball when an actual volleyball hits his head.

While at the Reef, Pink Pearl admires the items stored there due to them giving her nostalgic feelings. She also reveals Pink Diamond once gave her a ribbon wand as a gift, to Pearl's jealousy. Just as Pink Pearl is scanned by Shell so she can be healed, it's revealed that she cannot actually be healed due to her scar being as a result of psychological damage. She tries to tell Steven and Pearl that she is fine, but the crack on her eye only gets worse.

Pearl criticizes White Diamond's carelessness, only for Pink Pearl to reveal it was Pink Diamond who gave her the scar due to one of her tantrums unleashing her destructive powers that caused Pink Pearl to be psychologically damaged. The two Pearls argue over her differing accounts of Pink Diamond, which enrages Steven and causes him to unintentionally trigger Pink's destructive powers, much to Pink Pearl's distress.

Suddenly, Shell concludes both Pearls are defective and tries to rejuvenate them, with Steven unable to do anything. Pearl and Pink Pearl connect, make amends (with Pink Pearl realizing she was making excuses for Pink Diamond, and Pearl revealing she didn't stop hurting), and fuse into Mega Pearl, who saves herself and Steven from Shell.

Returning to Beach City, Mega Pearl says neither Pearl nor Pink Pearl got the full picture of Pink Diamond, but now they have each other, much to Steven's joy. She then unfuses, and Pink Pearl leans on Pearl's shoulder. 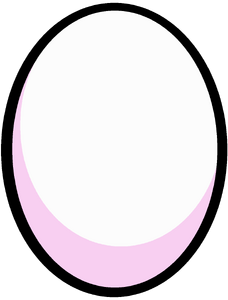 Pink Pearl's gemstone is located on her upper navel. It is an ellipsoidal cabochon (facetless). 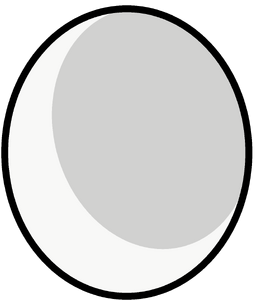 Pink Pearl's gemstone (as White Pearl) is located on her upper navel. It is an ellipsoidal cabochon (facetless). It is white and gray instead of pink. 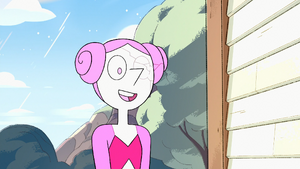 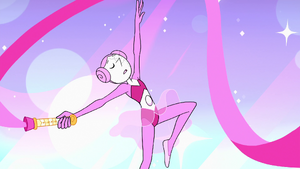 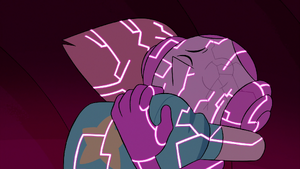 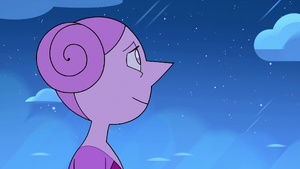