A Pink Yoshi first appears in Super Mario World 2: Yoshi's Island. Here, it is only playable in the second level of each world. It has pink skin and orange shoes with an orange saddle. However, in the Game Boy Advance port, Super Mario Advance 3: Yoshi's Island, Pink Yoshi wears blue shoes instead. Apart from its color scheme, it does not bear any differences from the other types of Yoshis in the game.

In the original game for the Super Nintendo, the Pink Yoshi is more magenta in its color. However, this was changed in the Game Boy Advance remake, where it is a truer pink color, much like in other games it appears in.

In Yoshi's Story, a Pink Yoshi is among the Baby Yoshis the player can choose from before starting a level. It wears yellow shoes and a red saddle in this game, a color scheme also present in most later games, excluding Super Mario Sunshine. It does not differ from other playable Yoshis apart from its color and diet.

Pink Yoshi is featured on the cover art picture of the North American Yoshi's Story cartridge.

In Yoshi Touch & Go, Baby Mario can acquire a Pink Yoshi by achieving a score of at least 80, but less than 100 points in the vertical falling parts of the game. Here, it can carry a total of 30 eggs and is the third slowest Yoshi, being faster than the Light Blue Yoshi but slower than the Blue Yoshi.

Pink Yoshi reappears in Yoshi's Island DS, playing in every second level. It plays the same as any Yoshi. It is paired with Baby Peach. However in this game Pink Yoshi has a brighter color than the original game.

In Mario Kart: Super Circuit, when playing multiplayer with a single game cartridge, the second player will always play as Pink Yoshi.

A Pink Yoshi, alongside various other Yoshis, cameos in the first lap of Yoshi Park 1 in Mario Kart Arcade GP 2, where pictures of them pop out of egg props.

Yoshi can turn into a Pink Yoshi in Super Mario Sunshine. If he eats a Coconut or a Banana, his pigment turns pink in color. While pink, Yoshi's juice can turn enemies into platforms that move vertically upwards. The real Pink Yoshi is not in this game.

Even though Pink Yoshis do not appear in New Super Mario Bros. U, Balloon Baby Yoshis make an appearance to allow the player to float in midair.

In Mario Power Tennis, Yoshi can change colors every time he performs a Rolling Egg Return, provided the player has completed the Flower Cup with any character. One of the colors that Yoshi can turn is pink.

In Paper Mario: The Thousand-Year Door, if the Yoshi kid takes 15-18 minutes to hatch, it hatches as a Pink Yoshi kid. The Pink Yoshi kid has green hair, and red polka dotted pants.

In Mario Super Sluggers, the Pink Yoshi is a team player. It has the worst pitching abilities, but it is also the fastest team player, being just as fast as the team captain Yoshi.

Pink Yoshi appears in Mario Sports Mix as an alternative coloration of Yoshi. It can be unlocked by playing 25 matches as Yoshi or passing the Pink Yoshi mission at Flower Cup.

Two Pink Yoshis made cameo appearances on the Yoshi's Island board. 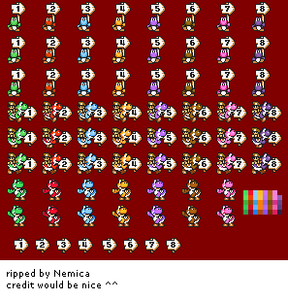 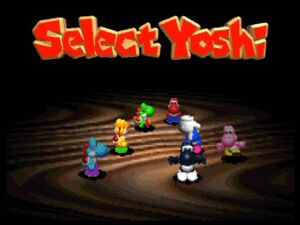