This page is about the Disney incarnation. For the original Collodi character, click here.

Pinoke (by Jiminy Cricket and Lampwick)

As a puppet:
Invulnerability
Shapeshifting (via nose grows when he lies)
Aquatic adaptation
Strategist

Spending time with his father.

Vindicate his loved ones (succeeded).

Pinocchio is the titular main protagonist of the 1940 animated Disney film of the same name , which is based on the original 1883 novel, The Adventures of Pinocchio by the late Carlo Collodi. He is a living puppet, who must prove himself worthy to become a real boy, with the help of Jiminy Cricket as his conscience.

One of the most challenging tasks the Disney studios went through during the making of the film was finding the perfect Pinocchio. The animators tried and tried to get the right wooden boy. The tasks was so frustrating that Walt Disney actually ceased production on the film until they were able to find to right Pinocchio. Soon enough animator Milt Kahl created a small piece of animation that would eventually become Walt Disney's Pinocchio.

In early drafts, Pinocchio also retained his more obnoxious traits from the book, though Walt hated the direction as Pinocchio was not likable enough. Eventually, further development lead to Pinocchio taking on the more innocent traits he has in the final film.

Pinocchio was originally planned to be a bratty and selfish know-it-all character. Much like the original story, Pinocchio was going to be rude but Walt Disney knew that was not the little wooden boy for his film. Pinocchio transformed from a brat of a kid to a truly innocent little boy made of wood. Through the course of the film Pinocchio became more and more aware of the dangers of his life and even set out to rescue his father from a legendary sea monster which would soon give him the earnings of becoming a real boy.

In the film, Pinocchio was first introduced as a lifeless puppet in Geppetto's workshop. When it was time for bed, Geppetto caught sight of a wishing star and wished Pinocchio to become a real boy. Once Geppetto fell asleep, his home was visited by the Blue Fairy, who brought Pinocchio to life and Jiminy Cricket became his official conscience to tell him right from wrong, for, if Pinocchio proved himself brave, truthful and unselfish, he would be transformed into a real boy. Geppetto discovered his puppet is alive and celebrated along with Figaro the kitten and Cleo the goldfish.

The next morning, Pinocchio is ready for school, but is stopped by two villainous actors: J. Worthington Foulfellow (a.k.a. "Honest John") and his silent sidekick, Gideon, who tricks him into working for Stromboli, a puppeteer. They tell him being rich and famous is the only way to live. Pinocchio listens, believes, and ends up following the wrong path. Jiminy tries to stop him, but is unsuccessful, so he chases after him.

Pinocchio became the star of Stromboli's marionette show. Stromboli is paid beyond his wildest dreams for Pinocchio's magnificent performance. After the show, Pinocchio and Stromboli are dining and the man's true nature is revealed as parsimonious, evil and rotten. Stromboli cages Pinocchio and threatens him to perform. Pinocchio manages to escape with the help of Jiminy and the Blue Fairy, but he is scolded for lying to the Blue Fairy and ignoring Jiminy Cricket's advice.

During their trip home, Pinocchio and Jiminy race home, but Pinocchio is stopped once again by Honest John and Gideon. They tell Pinocchio he is sick and the only one cure is a vacation on Pleasure Island. They take him to the Coachman, along with many other boys, including a brat named Lampwick, who Pinocchio calls his best friend as the two have fun together on Pleasure Island.

Once the place is torn apart, everyone has vanished, except Lampwick and Pinocchio, who are smoking and drinking while playing pool. Once Jiminy confronts the two, he is so mad after Lampwick insults him, he storms out. Soon, Jiminy discovers the Coachman's plan; Pleasure Island has the power to transform bad boys into donkeys, which the Coachman sells into slavery, and rushes back to get Pinocchio.

After Lampwick is transformed into a complete donkey, Pinocchio sprouts donkey ears and tail and panics. Jiminy then returns and tells Pinocchio that all the boys are now donkeys, sees he's part donkey too, and tells him to run and escape the island before the transformation could go any further. Pinocchio and Jiminy barely escape, going down a small rocky path which is the only way out of there.

The two finally reach home, but realize there's no one home. They sit and wait on the steps for everyone to return. Suddenly, the Blue Fairy comes in the shape of a dove and gives them a letter which tells them Geppetto was eaten by Monstro the Whale.

The pair start searching the ocean for Monstro with very little luck. When they ask sea creatures such as clams and seahorses, they swim and hide in fear at the mention of Monstro's name. Meanwhile, after a nap, Monstro awakens and begins an eating frenzy. Everything in his path was either devoured or destroyed (including Pinocchio). Once Monstro was found, Pinocchio was able to reunite with Geppetto, Figaro and Cleo. Pinocchio soon thinks of a plan to escape Monstro by making him sneeze.

Once Pinocchio is able to get Monstro to sneeze them, the whale furiously shakes and drinks lots of water to put out the fire then chases after him and his father. The whale destroys the raft, sending Pinocchio and Geppetto into the unforgiving sea. After witnessing his father almost drowning, Pinocchio grabs him and swims to shore as quick as he can, but it's too late. Even before he gets there, Monstro slams into a rocky wall, creating a forty foot tidal wave, violently sending Pinocchio, Gepetto, Figaro, Cleo, and Jiminy to shore. All of them, except Pinocchio make land on the shore unharmed. When Jiminy looks for Pinocchio, he makes a very depressing discovery, Pinocchio is lying face down in the water.

Geppetto, Figaro, Cleo, and Jiminy return home and grieve over Pinocchio. However, the Blue Fairy revives Pinocchio and transforms him into a real boy because he has now proved himself brave, truthful and unselfish as Geppetto, Figaro, Cleo, Jiminy and Pinocchio began the celebration once again as Jiminy goes outside from Geppetto's window to thank the Blue Fairy for reviving Pinocchio and transforming him into a real boy. Jiminy is then awarded with a certified 14-karat conscience badge for being a good conscience to Pinocchio to which Jiminy thinks its swell as he holds out his badge at the stars.

Pinocchio makes a cameo appearance at the end of Who Framed Roger Rabbit, among the group of toons wondering what sort of Toon Judge Doom was.

In the 1992 film, the Genie briefly transformed his face into Pinocchio when he thinks Aladdin is lying about using his third wish to set him free.

Pinocchio made numerous cameo appearances in the television series House of Mouse, where he was voiced by Michael Welch. His most prominent appearance on the show was in the episode "Jiminy Cricket", in which Pain and Panic convince him to hang out with them and ditch Jiminy. Pinocchio tries to return but he finds out that Jiminy is now Mickey Mouse's conscience instead, so Pinocchio leaves with Pain and Panic. In the end, Pinocchio speaks up and reunites with Jiminy. In another episode, Pinocchio was seen being used as a regular puppet by Geppetto. In Goofy's Menu Magic, Pinocchio and Geppetto can be briefly seen sailing on their raft in a sea of soup.

Pinocchio is a recurring character in the popular Kingdom Hearts series. He, along with Geppetto, was briefly trapped in Monstro, but eventually rescued and moved to Traverse Town until their world was restored.

As with the movie, Pinocchio is, originally, a wooden puppet brought to life by the Blue Fairy after his maker Geppetto wished for a son, and Jiminy Cricket has been assigned to be Pinocchio's conscience, because he's too young to know the difference between right and wrong. Unfortunately for all three, the Heartless destroyed their world, causing them to become separated.

Jiminy ends up at Disney Castle, where he becomes the Royal Scholar and is eventually assigned to travel with Donald and Goofy (and later Sora) to write down their adventures.

It is unknown where Geppetto went, but as Sora, Donald and Goofy travel throughout the different worlds, they discover Pinocchio running around Traverse Town. Without his conscience, Pinocchio has been misbehaving, but in the end, Jiminy manages to set him straight. Pinocchio promises Jiminy that he would behave from that point onwards and find his father.

Some time after Pinocchio escapes Traverse Town (currently, it is unknown how such a feat was accomplished), he's reunited with his father and both of them end up inside of Monstro.

When Sora, Donald and Goofy are on their way to Atlantica or Halloween Town (depending on the player's choice), Monstro comes and swallows their Gummi Ship whole. The trio wake up inside of Monstro's mouth and, after exploring, reunite with Pinocchio once more and finally meet his father, Geppetto.

Pinocchio, however, notices Riku (it's unknown how Riku got to Monstro, though it seems likely he used a portal of darkness to get there) from afar, running into one of Monstro's bowels. Curious, Pinocchio follows Riku but is captured by him, as Riku hopes to use Pinocchio's heart to revive Kairi's. Riku leads Sora, Donald and Goofy on a chase of hide and seek, constantly throwing taunts to his old friend. Pinocchio eventually manages to escape from Riku, but runs into a giant Heartless, the Parasite Cage, and ends up trapped inside it.

The Parasite Cage attempts to steal the puppet's heart. It's because of this that Riku and Sora team up to destroy it- but after rescuing Pinocchio, Riku kidnaps him again and eventually takes Pinocchio's heart, believing it can replace Kairi's.

Thanks to the compassion of Jiminy Cricket and Pinocchio's friends, together they manage to return Pinocchio to his former self.

After Sora, Donald and Goofy leave Monstro, it is later seen that Pinocchio and Geppetto are now living in Traverse Town in a house found for them by Leon, trying to piece their life together again. At the end of the game, during the credits, Pinocchio has become a real human boy.

Pinocchio reappears in Kingdom Hearts: Chain of Memories as a fragment of Sora's memories. In this version, he feels guilty for getting trapped within Monstro, and so goes deeper into the giant whale's body to find a way out.

When the trio finally catch up, Pinocchio is caught inside a Parasite Cage Heartless again. After they defeat the heartless, Sora teaches Pinocchio to be brave and fight his way out. He does so and frees himself just before the monster vaporizes. Then, he gives them an idea about making Monstro sneeze to escape. After he gave them his idea, he returns to Geppetto. When the trio heroes make the monster sneeze, Pinocchio and Geppetto escape to safety.

It has been confirmed that Pinocchio will be featured in the upcoming installment in his homeworld Prankster's Paradise. Recent scans show the Pinocchio has been reverted into a puppet. 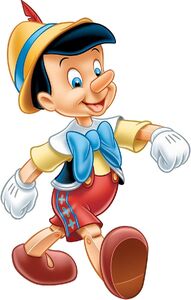 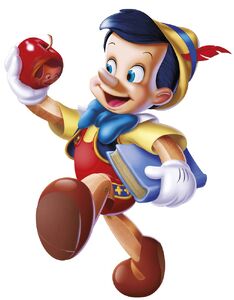 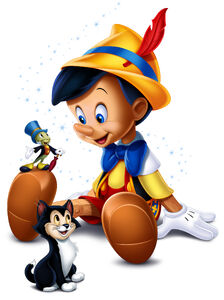 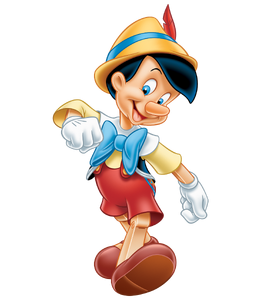 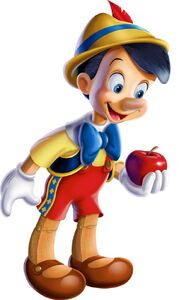 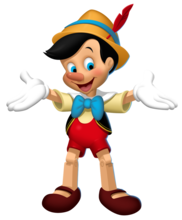 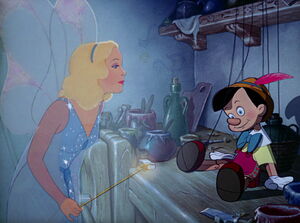 Pinocchio about to be brought to life by the Blue Fairy. 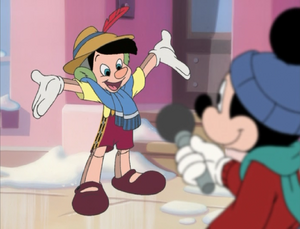