Pinocchio is a supporting hero in the Shrek film franchise. He is one of Shrek and Donkey's best friends who used to be owned by his wood carving owner, Geppeto but his father gave him away to the banished fairy tale creatures who were forced to live in Shrek's swamp. Whenever he tells the truth, his wooden nose grows very long. And also he longs to be a real human boy but he just stays as a wooden puppet forever.

He was voiced by Cody Cameron who also voiced by Mr. Weenie from Open Season.

Pinocchio was first seen being sold to Lord Farquaad's men by his "father". Farquaad's guards mark him as the "possessed toy". Geppetto receives five shillings for him. He is one of the many Fairy Tale creatures who ended up on Shrek's swamp. He has a small role, but in the other films he has a fairly large role.

Prior to the movie he becomes one of Shrek's best friends. He has an Ascended Extra in the movie. Pinocchio, along with other fairytale characters see Shrek, Donkey and Puss being taken to prison. He and the others help break them out. He is brought down by strings but gets tangled up. Gingy slides down and Shrek asks him to tell a lie so Gingy can walk on his nose and unlock the handcuffs. Donkey suggests that he says I'm wearing ladies underwear!. He does, but this is true; therefore, his nose does not grow. Shrek asks him if he is, and Pinocchio says he's not, which is a lie.

When he tries to get the Fairy Godmother's wand, she zaps him with it and he turns into a real boy. When the wand is passed to The Three Blind Mice, it transforms Pinocchio back into a puppet, much to his disappointment.

Pinocchio has another major role in the third film. When confronted by Prince Charming on Shrek's whereabouts, Pinocchio told him a twisted up version of the truth while trying not to tell the truth but trying not to lie at the same time, something that confused everyone. He is later seen trapped inside a machine as a coin-operated puppet and tells the truth about Fiona and the others to Shrek but his curtain keeps falling down. He is later seen fighting Charming's army.

Pinocchio has a supporting role in the fourth film. Pinocchio first appeared telling Rumpelstiltskin that he was going to have to pay for a library book because he was ripping it up, revealing that he's the library's owner. Rumpel then offers him a contract to become a real boy, but Pinocchio realizes it's a trick and kicks him out of the library.

In the alternate universe, he is next seen almost signing a contract with Rumpelstiltskin to become a real boy, but Shrek disrupts it because he is more important to talk to now. He is next seen trying to sell Geppetto (with a green-painted face) as Shrek to win the deal of a lifetime, but Rumpelstiltskin is not fooled. He is seen in the credits when one of Rumpelstiltskin's witches mistakes Pinocchio's long nose for a broomstick.

In a deleted scene shows him fighting alongside with the other fairy tales against Shrek. 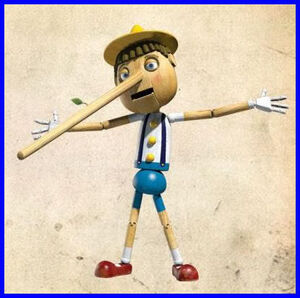 Retrieved from "https://hero.fandom.com/wiki/Pinocchio_(Shrek)?oldid=1736323"
Community content is available under CC-BY-SA unless otherwise noted.