To defeat Gaia and the Giants (succeeded)

Piper McLean is the demigod daughter of Aphrodite (the Greek Goddess of Beauty and Love) and the actor Tristan McLean, the counselor of Cabin 10 at Camp Half-Blood, the former girlfriend of Jason Grace and one of the main characters of the 2010-2014 Greco-Roman book series The Heroes of Olympus.

Piper was born to Aphrodite and Tristan McLean (a man of Cherokee descent) fifteen years before the events of the series. Sometime after Piper's birth, Aphrodite left to return to her godly duties, leaving her daughter in Tristan's care.

Piper later lost her grandfather Tom to lung cancer, as Tristan was unable to pay for treatment. Tristan eventually started an acting career and his most well-known role was in a Greek mythology film called King of Sparta. Piper helped her father practice for his role by researching the Greek myths. However, due to his career, Tristan was unable to spend much time with Piper.

The Lost Hero: Piper is one the heroes in the second Camp Half-Blood book series, the Heroes of Olympus. She is one of the seven heroes and a daughter of Aphrodite. She has false memories of dating her boyfriend Jason, learns she's a demigod and goes to a place called Camp Half-Blood. She soon goes on a quest with Leo Valdez and Jason Grace. Along the way, she must also save her father, and with a mission gone successful, she soon becomes the camp counselor of Cabin Ten.

The Son of Neptune: Piper doesn't show up in the Son of Neptune past a recording and several references to her character. During this time she and her team were finishing up the Argo II to help save Percy Jackson in the Roman camp.

Piper appears in the third book "The Burning Maze" where her and Tristan's home in Malibu becomes repossed by Triumvate Holdings (a trio of Rome's worst emperors). She along with Jason (now Piper's ex-boyfriend) helps Apollo and Meg McCaffrey battle one of the emperors: Caligula, who wishes to become the new sun god by taking Apollo's powers with the help of a sorceress named Medea (whom Piper and Jason encountered in "The Lost Hero"). Much to Piper's sadness, Jason dies fighting Caligula. Piper avenges Jason by killing Medea and says to her "I'd tell you to say hello to Jason for me, but he'll be in Elysium. You... won't." 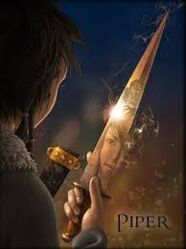 Aphrodite, her mother
Add a photo to this gallery

Retrieved from "https://hero.fandom.com/wiki/Piper_McLean?oldid=2151087"
Community content is available under CC-BY-SA unless otherwise noted.