Piper Pinwheeler is the sister of Fender and one of the characters in Robots (2005). She also has a crush on Rodney and wants to help him when he is in danger.

She is voiced by Amanda Bynes.

Shortly after meeting Rodney, she scolds him in order to stand up for Fender, but stops herself in mid-sentence and comments that he's cute. Then, he gave Wonderbot back to Rodney and told him that her name is Piper and that she'll see him around.

She later yells at Jack Hammer when he cannot provide the proper parts to fix her brother's neck and later on, Rodney fix Fender's neck. Despite her scrappy, tomboyish attitude, Piper is thought of by Fender and the rest of their friends as the kid of the group who cannot take care of herself.

This annoys her greatly, and she proves them wrong in the film's climax by rallying the numerous robots that Rodney fixed to help defeat Ratchet and Madame Gasket.

Later in the movie, after she sees Cappy with Rodney, she indignantly blurts "Who the heck is she?", hinting that she might be jealous.

However, she doesn't seem to hold any animosity towards Cappy because of this, and is not shown to be angry or jealous when she dances with Rodney at the victory celebration in Rivet Town. 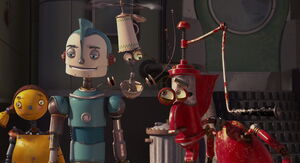 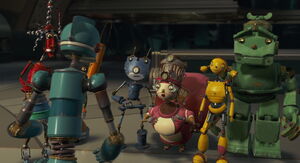