Have fun with Annika and Tommy

Sail around the world with her father

Stay at Villa Villekulla with her friends.

Save her father from The Pirates (Succeded)

Kid Hero
Tragic Hero
Heroine
Pippilota Dellicatessa Windowshade Mackrelmint Efraim's Daughter Longstocking (simply known as Pippi Longstocking) is the titular protagonist of a book series by the Swedish author, Astrid Lindgren and all of its TV and film adaptions. She was portrayed by Tami Erin in the American-made film adaption, The New Adventures of Pippi Longstocking, and voiced by Melissa Altro in the animated musical adaption and its spin-off TV series.

She is a freckle-faced, red-headed girl with pigtails and, of course, long stockings (that are odd-colored, of course).

She is "the strongest girl in the world," (due to her superhuman strength). She has never had an education at school (she only went once to see what it was like there and to get Christmas holidays; however, after her first day, she decided not to attend school, with or without those holidays). She owns a monkey named Mr. Nilsson and a horse who doesn't have an official name (being given different names throughout various adaptations). She spent most of her life at sea. She is, as her real name reveals, the daughter of Captain Efraim Longstocking and a deceased mother who is in heaven (but she doesn't believe she is dead). 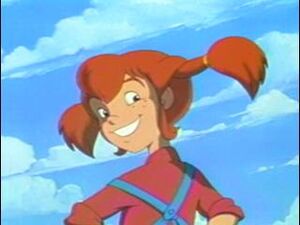 Pippi Longstocking in animated form as in both the 1990's musical film and the TV series. 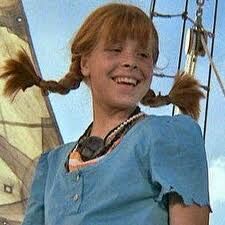