Flying, piece of her soul removed

Superhero, Mutant, Pixie/Fairy
Pixie (Megan Gwynn) is a fictional character, a mutant in the Marvel Universe. Her mutation grants her pixie-like eyes, colorful wings that allow her to fly, and "pixie dust" which causes hallucinations.

Pixie is a fairy-winged mutant who can cause those exposed to her dust to experience hallucinations. Magik forged a fragment of her soul into a dagger which can disrupt magic and mystical beings. Pixie is a teleporter by means of a teleportation spell. She is a member of the X-men.

After a confrontation with the revived former member of the New Mutants, Magik, she gains the ability to use magic and a magical weapon called the "Souldagger." Her main use of magic is a massive teleportation spell, which makes her a key asset to various X-Men missions and teams and places her as one of the titles' primary magic users. She was first introduced as a student on the Paragons training squad at the Xavier Institute in New X-Men, vol. 2, later joining the New X-Men team, and later graduating to the Uncanny X-Men team. Though only a side character in her initial appearances, she has since become a prominent character in various X-Men titles. 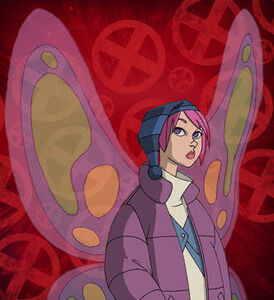 Pixie in Wolverine and the X-Men 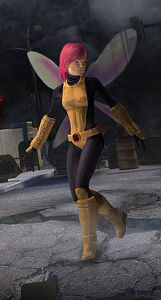