To always be cool

Pizza Steve is one of the two deuteragonists (alongside Belly Bag) of the animated series Uncle Grandpa. He is a slice of pizza with a pair of sunglasses he wears, he likes to party and annoy Mr. Gus with his messy manners.

He is a slice of pizza with pepperoni and gooey cheese. He wears sunglasses with a glare and has tiny hands and feet.

Pizza Steve is very arrogant, self-centered, and displays a superior complex towards his own friends, believing that he is the only person who is best amongst all the members of Uncle Grandpa's RV, although, Pizza Steve is aware of the fact that he is a failure to everything, but he didn't wanted to admitted due to being feared from losing Uncle Grandpa's interest and their friendship.

Pizza Steve also enjoys bullying Mr. Gus for how boring the dinosaur is, he also manipulates and constantly lies to Uncle Grandpa in order to have his own ways, which dissatisfied his own friends, especially Mr. Gus.

Although, despite his arrogance, Pizza Steve does care for others and would be there for his friends when needed.

Pizza Steve and Mr. Gus has a frenemy relationship, as Pizza Steve views Mr. Gus to be extremely lame because of the green grumpy lizard enjoys sticking to classic, and historical related subjects. Although, at times, the two would sometimes at-least agreed in something.

Pizza Steve usually wouldn't brag a lot about how cool he is while he's around with Mr. Gus due to understanding that Mr. Gus knows that he's lying and possibly because Mr. Gus is too lame and doesn't joke. 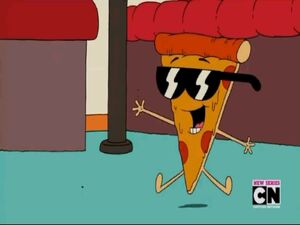