Obtain the essences of the former members of the Order of No Quarter to create the ultimate potion. (succeeded)

The Enchantress (formerly)
The Order of No Quarter (formerly)

The Order of No Quarter

Obsessive Alchemist
Plague Knight is a boss and a later playable character in Shovel Knight, the Plague of Shadows update to be precise. In Shovel Knight's story, he is a villain, but in his own story arc, he plays a more anti-heroic role.

Plague Knight is deranged and insane, as well as being very indifferent towards almost anyone he meets. He gleefully experiments with dangerous things, his minions even fearing they might be his next guinea pig. He also mocks or threatens a lot of people, usually due to lower intelligence. The only people he has positive relations with are Mona, a girl who he has a crush on, Tinker Knight, a fellow knight of The Order of No Quarter, who he actually respects very much due to his intelligence, and he acts less insulting to some of his minions, like Percy or The Magicist.

A fascination for all things explosive and his crazy personality make him a tough, slippery opponent who constantly bombards Shovel Knight with bombs that make large fire explosions or make fire crawl along the ground. He can also teleport. He has a double jump and an explosion that boosts him into the air at alarming speeds. He uses many different magic items, such as a smoke bomb tthat makes him invincible, a liquid that lets him steal health from enemies and a liquid that makes him charge forward, unable to be stopped.

Plague Knight appears in Super Smash Bros. Ultimate as a novice support spirit that increases the user's powers on fire and explosions. His spirit can be obtained by scanning an amiibo of him or defeating him in his spirit battle who is on the Unova Pokémon League stage against Dr. Mario who have increases power on fire and explosion and is distracted by items. 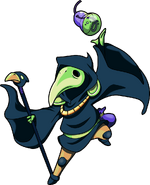 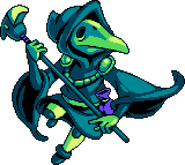 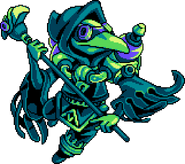