Platinum the Trinity first appears in the story-mode of Continuum Shift. She is a girl who has three souls, including the spirit of one of the Six Heroes. At the end of Chronophantasma, the soul of Trinity Glassfield was killed. It's unknown what happened to the rest of Platinum.

A young girl with three souls named Luna, Sena, and Trinity. Luna is a rude young girl; Sena is a polite young boy; and Trinity is the spirit of one of the Six Heroes. Trinity's personality is locked within her Nox Nyctores, and she is only able to come to the surface for brief periods of time. This Nox Nyctores' full name is Arma Reboare: Muchōrin, a bell which has the power to incarnate matter. Platinum normally prefers to avoid violence and lives in the ruins of 5th Hierarchical City of Ibukido, but came to 13th Hierarchical City of Kagutsuchi by request of Jubei in order to awaken Bang's Nox Nyctores named Phoenix: Rettenjō. Platinum is seen watching over Ragna, who is with Jubei all the time. Luna is very fond of Jubei, but harbors a deep hatred towards Ragna, most likely due to his connection with Jubei. She also appeared before Bang Shishigami, telling him about the Nox Nyctores that he possesses.

In Platinum's True Ending in Continuum Shift Extend, her doings before meeting up to Bang are told. At the beginning she heard a voice in her dream of Trinity and an unknown voice during the Dark War. After a while traveling through the sewer, they encounter Arakune. Later Luna gets very jealous of Litchi when she saw her with Jubei; at first Luna though Litchi was flirting with him because of her bosom. At the end, they decide go back home to Ikaruga with Bang and his companions.

Upon her arrival to Ikaruga, Platinum splits up with Bang to find Hazama and beat him for Jubei. When she finally finds him, Trinity awakes from her slumber and asks what Terumi's real purpose is. Their conversation is interrupted as a causality interference occurs, causing Trinity's soul to subside while Platinum is teleported away, encountering Phantom. Later on she encounters Hazama and weakens him, allowing Hakumen to kill the Terumi from the past, which kills Hazama. But before Hazama dies, he strikes her, and they both die.

Platinum is directly taken from the Magical Girl archetype. She appears as a very young girl in a sleeveless white shirt with buttons and blue lining. The outfit is completed by a blue skirt. She wears a pair of white gloves with large cuffs and a pair of similar colored shoes with heart-shaped toeguards. Her hair is a peach-blond, length-wise, reaching her ankles and tied up in two long ponytails. She wears a light green headband and a big ribbon tied to her four pigtails. Her eyes are green with distinct brighter heart-shaped pupils. While wearing her cloak, her eyes are overshadowed, showing only her mouth, and she carries her weapon covered with belts and a black bag. Her cloak covers her whole body, and is a cream color. In Continuum Shift's story, she appears in her cloaked form, but even then rarely appears. She even appears to have a 'cowbell' around her neck in both her normal outfit and cloak.

Platinum has three split personalities: The first is Luna, who is a rude girl with a stubborn attitude that hates Ragna, but admires Jubei. The second is Sena, who is polite, understanding, and sometimes curious boy who tries to calm Luna down whenever she encounters Ragna. And lastly, Trinity, one of the Six Heroes, but she barely has time to control Platinum's body, which is almost similar to her own body.

Having one of the Six Heroes assisting her, Platinum possesses exceptional skill and power on magical attacks. Her Jekyll and Hyde personality is somehow derived from the three souls she has due to her Nox Nyctores. She also uses her staff as a melee weapon when attacking close range enemies. Platinum's Drive, Magical Symphony focuses on incarnating things and changing the appearance of her staff using her Nox Nyctores. 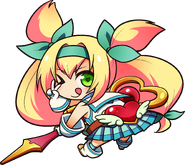 Lord Of Vermilion Re:3
Add a photo to this gallery

Retrieved from "https://hero.fandom.com/wiki/Platinum_the_Trinity?oldid=1630192"
Community content is available under CC-BY-SA unless otherwise noted.