Computer Nerd Sidekick
Player (born name Bouchard) is a teenage hacker who currently assists Carmen Sandigo in her capers against V.I.L.E. He first made contact with Carmen through a phone she stole from The Captain during her time on the Isle of V.I.L.E.

He is voiced by Finn Wolfhard who play's Mike Wheeler in Stranger Things.

Player is a young teenager with side-fringed dark brown hair, brown eyes and tan skin. He wears a gray and red jacket over a red shirt, with navy blue shorts and gray sneakers.

He is a talented hacker, being able to contact Black Sheep's stolen phone after hacking through V.I.L.E. Academy's 27 layers of security. As a White Hat hacker, he uses his talents only for good reasons and seems to have a strong moral compass.

He seems mild-mannered and makes jokes often, being able to hold light friendly banter with Carmen. He mentions being perfectly happy in his "dark little cave", and doesn't seem all that interested in going outside for himself. It's possible he's more interested in experiencing the world vicariously through Carmen's adventures.

He's surprisingly quick to trust Black Sheep initially, even when her answers don't seem to make much sense at first, and chooses to go with the flow and believe her when she does admit she's in a school for thieves.

He's confident in his skills and his friends', though he still shows concern for Carmen when things turn dicey. 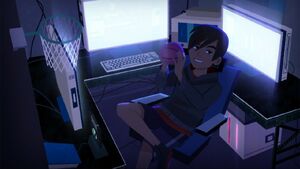 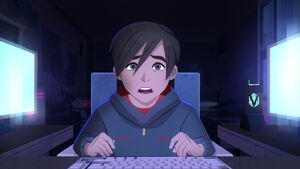 Retrieved from "https://hero.fandom.com/wiki/Player_(2019_series)?oldid=2138404"
Community content is available under CC-BY-SA unless otherwise noted.