End of the Clone Wars (failed).

Plo Koon is a protagonist in the Star Wars series, appearing as a supporting character in the prequel trilogy and Star Wars: The Clone Wars.

He is a Kel Dor Jedi Master from the planet Dorin. He became a Jedi Master and a member of the Jedi High Council and holding up until the end of the Clone Wars. Koon is one of the most powerful Jedi ever, with awesome fighting abilities, strong telekinetic powers, and superb piloting skills. He also discovered the young Jedi, Ahsoka Tano, whom he had a close bond with. Despite his death during the Jedi purge, he was avenged by Anakin Skywalker upon his redemption by defeating Emperor Palpatine.

He was played by Alan Ruscoe in The Phantom Menace, and Matt Sloan with Ruscoe in Attack of the Clones, as Sloan returned to play him in Revenge of the Sith. In Jedi Power Battles and Star Wars: Obi Wan, he was voiced by Gregg Berger, who also voiced Magna Charge in Skylanders: Swamp Force, Grimlock in Transformers, and Eeyore in the Winnie the Pooh franchise.

In Star Wars: The Clone Wars, he was voiced by James Arnold Taylor, who also voiced Obi-Wan Kenobi in the series and Star Wars Rebels, Triton in the Marvel Animated Universe, Ratchet in the Ratchet & Clank series, Johnny Test in the titular animated series, Parker Perfect in Wacky Races Forever, Throk in Dragons: Race to the Edge, Milo James Thatch in Atlantis: Milo's Return, and Happy in Kingdom Hearts: Birth by Sleep.

Plo Koon was born on the planet Dorin, being a member Kel Dor species, and his family had a strong connection to the force, with three of them having been members of the Jedi Order. Koon's force sensitivity was discovered in his infancy, and he was turned over to the Jedi Order once his abilities emerged. After passing the initiate trials, Plo achieved the rank of padawan and became the apprentice of master Tyvokka. His niece, Sha Koon, would be placed into the Jedi Academy once her force powers emerged, and Plo developed a strong bond with her despite the Jedi's rules on attachment.

While one of the High Council's most valued members for his knowledge and combat experience, Koon remained silent at most meetings, listening to the deep discussions of his peers. Koon was present when his friend Master Qui-Gon Jinn reported his suspicions that the Sith Lords of old were returning and brought forth a boy believed to be the destined Chosen One named Anakin Skywalker. The Council did not come to final decision when Jinn was slain on Naboo. The Council traveled to Naboo for the funeral of Jinn where Koon and the rest of the Council allowed Obi-Wan Kenobi to train the young boy.

During the Separatist Crisis, Plo Koon attended meetings with the Council and the Supreme Chancellor to discuss the matters and dangers if war was to come. During a Council meeting, Koon listened to Obi-Wan and Anakin's reports of the assassination attempts on Senator Padme Amidala's life where the decision was reached for Skywalker to escort the Senator to her home planet.

Soon after, Koon was present with the other Council members to listen to a coded message from Obi-Wan who was trapped on Geonosis and taken captive by the Separatists. Master Mace Windu formed a Jedi taskforce to rescue Kenobi which Koon joined and charged the plains of Geonosis and later on the outskirts of the planet when the clone army arrived rescuing the hostages and winning the first battle of the war.

During the Clone Wars, he served as a Jedi General in the Grand Army of The Republic who led many soldiers to battle and participated in many battles. He was also an accomplished star fighter pilot. Koon lead many missions and battles.

Plo led a mission to rescue Republic officers from a vengeful Boba Fett who wanted to kill Mace Windu by first visiting Corsucant underworld bars for information and found where they were being held.

Plo fought in the three battles of the fungi world Felucia and took out many Separatist outposts with his clone brigade, the Wolf Pack and fought alongside Anakin and his apprentice Ahsoka. The battles were long and hard but Koon was not able to free the planet from Separatist control. When he was called away, Jedi Knight Aayla Secura took over his position on the planet.

After the Jedi temple bombings, Koon at first refused to believe Tano was behind the bombings, and Plo was assisgned alongside Anakin to find her in Coruscant. The two discovered her with Asajj Ventress, but she managed to evade them until Koon and Skywalker succeeded in stunning her in a warehouse. Koon was present at Tano's trial, where he witnessed her be expelled from the Jedi Order by the orders of Wilhuff Tarkin. However, Skywalker arrived with Barriss Offee, who admitted to be behind the bombings to show that the Jedis had become corrupt due to the Clone Wars. Afterward, Plo was among the many who gathered to welcome Tano back, but she decided to leave the order as Koon sadly watched her leave.

At the end of the Clone Wars, Plo Koon lead a starfighter patrol above Cato Neimoidia where he was tragically gunned down without warning by one of his Clone commanders firing at his ship. Order 66 had been given, causing all pre-programmed clones to turn on their Jedi leaders. Plo's ship crashed into the planet and Koon was killed by Captain Jag. Masters Yoda, Obi-Wan Kenobi and other survived the order, and Anakin Skywalker was seduced by the dark side by Sheev Palpatine, who was actually the Sith Lord Darth Sidious.

Obi-Wan later defeated Anakin in a duel, but he survived and became Sidious' right-hand under the name "Darth Vader", and was tasked with hunting down survivors of Order 66. Following Anakin's defeat, Obi-Wan and Yoda went into hiding, as Kenobi watched over Anakin's son, Luke Skywalker until Luke became of age, and Obi-Wan taught him the ways of the force until his death by Anakin. In the final issue of the Darth Vader comics, a vision of Koon was present alongside other Jedis formed by Darth Momin, but Vader defeated them easily.

Vader would later redeem himself to save his son from Palpatine, thus becoming one with the Force and presumably reuiniting with Koon and the others. Luke would speak of Koon's heroism during the Clone Wars, noting that he had a penchant for taking dangerous missions, but was well regarded due to his calm and kind demeanour. Skywalker would go on to continue the teachings of the Jedi Order, starting his own to bring in a new era following the defeat of Palpatine.

Considered level-headed and unflappably calm, Koon was also one of the wisest in the Jedi Order. He was deeply concerned with every form of life, caring deeply for the clones, as he didn't see them as expendable. His compassion was also a part of his belief in justice, as his species was known to see issues in black and white, and favored "rough justice". In the Legends of his character, his master Tyvokka described him as humble yet stubborn person.

Koon also had shared a special bond with Ahsoka Tano when he found her as a baby. Despite his bond with her, he chose to side with the Jedi Order when Ahsoka was framed for murder and treason, and was sadden when she decided to leave the order. He did, however, apologized for not believing her and the council's failure, and admitted that he was wrong.

Plo Koon wore a special mask to protect his sensitive eyes and nostrils from the oxygen-rich atmosphere of planets such as Coruscant. His thick hide also allowed him to breath in space for short period of time, and he had armor on his talons, increasing his use of the force. Koon fought in the Battle of Geonosis and many more conflicts in the Clone Wars until his end.

Plo Koon was an exceptional Jedi Master and formidable duelist, to such a degree that the Sith Lord Darth Maul considered him to be one of the greatest Jedi warriors of his time. Koon's mastery of the force was great, being able to telekinetically push or move objects with ease. He had also mastered Electric Judgment, a powerful and complicated force technique forbidden by the Jedi as it was deemed too similar to force lightning.

Due to him being part of the Baron Do order, he had extensive knowledge on many techniques in force and combat abilities, and was held as one of the greatest swordsman in the Jedi Order. He was able to equal Asajj Ventress even while his arm was broken, and according to Anakin Skywalker, Plo was one of the few Jedi he had ever seen to have defeated Yoda in a duel. Plo was also a master pilot, and was considered by some to be third best pilot in the Jedi Order after Skywalker and Saesee Tiin. Plo was also greatly knowledgeable in physics and other sciences, which greatly assisted him when working to master the elemental powers in the force. 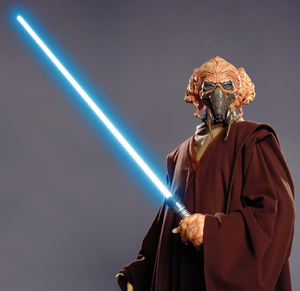 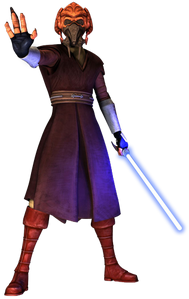 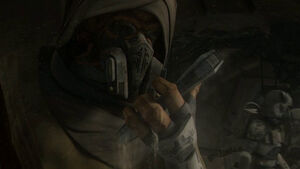 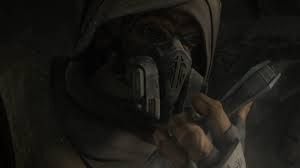 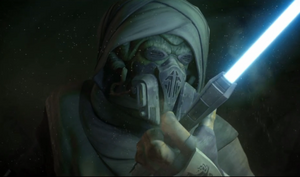 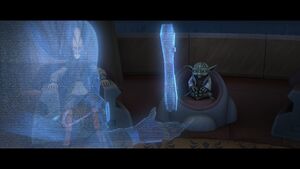 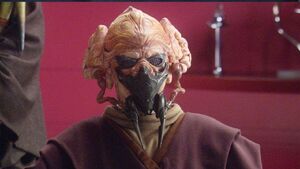 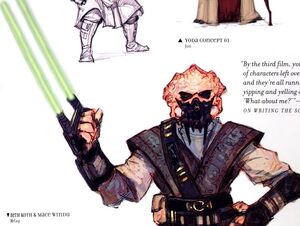 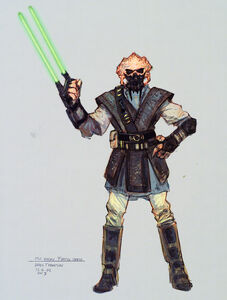 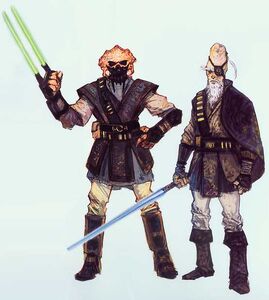 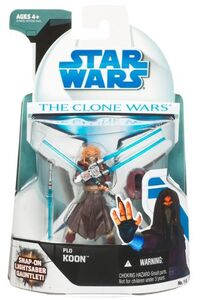 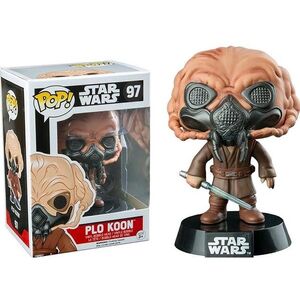