Hanging out with Buster, Babs, and Hamton

Trying to be famous

To be the star (ongoing)


To help his friends (succeeded)

Plucky Duck is the deuteragonist of Tiny Toon Adventures, the main protagonist of its spin-off The Plucky Duck Show, and a cameo character in Animaniacs. He will later return as one of the main characters of Tiny Toons Looniversity in some capacity. He is an anthropomorphic green duck who wears a white sleeveless tank top.

He is sometimes a trouble-maker and is in love with Shirley the Loon, but she never returns his love. However, she does go to school dances with him and invite him to some kind of party. His hero and favorite mentor is Daffy Duck. He is even modeled as Daffy Duck.

He was voiced by the late Joe Alaskey who also voiced Lou Pickles in Rugrats and All Grown Up in his current age and Nathan Ruegger as a baby.

Plucky is a young, hypocentric duck. He has big dreams of fame, wealth, and power, but he is too desperate to get them. In some episodes, he has heroic or even superhero roles.

Like his mentor, he is often greedy, selfish and egotistical, as he tries to steal the spotlight from Buster and Babs, despite them being his friends, but they often react to Plucky's behavior by setting him up in scenes of extreme pain and embarrassment. He also takes advantage of his best friend, Hamton for his own interests by forcing him into a reckless action and then abandoning him when things go bad, but he usually pays for his actions by retribution.

However, also he as a hero, he reveals the angel within by supporting his friends or saving them.

Plucky with Buster, Babs, and Hamton 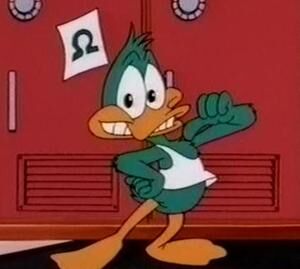 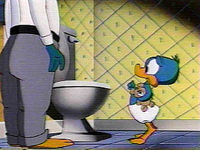