Poison is one of the criminals who are members of the Mad Gear Gang and an anti-heroine in the Final Fight and Street Fighter video game series.

Posion appears as an attractive woman who has a long purple hair and wears wears a black peak cap with a chain-link design, a skimpy white midriff-revealing tank top, and a pair of skimpy denim cut-off shorts and high heels. Besides, she geared up a chain around her waist, a studded black collar on her neck, and a pair of hand-cuffs hanging from the chain around her waist. In Final Fight Revenge, she now carries a riding crop that she uses as her weapon of choice during the fight.

In Street Fighter V, even though Poison does not appear in the game, her outfit has the following minor changes: her skimpy tank top has changed into shirt with bandages, which is covered in her top and has a single long sleeve at her left hand beneath it. Also, she has white band on her left elbow. Her cut-off denim shorts are replaced with color black that shows her the lines of her red thong beneath her shirt and has a gold band on her right thigh and her red high heels are actually maintained. 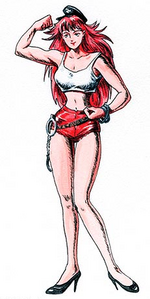 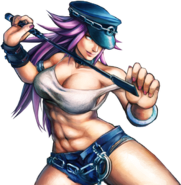 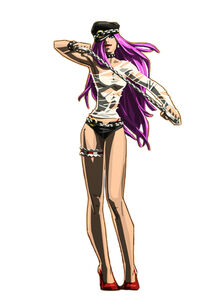