Poison Ivy is a character and currently an anti-heroine from DC Comics, A former botalogist, Pamela was mutated in an metahuman with the capabilities to control plants at will, and vowed to protect the green from humanity.

She was created by the late Robert Kanigher, and the late Sheldon Moldoff.

Pamela was born to unnamed parents, and was born with a skin condition that left her with an aversion to sunlight. Despite being prescribe with a lotion by a doctor, her abusive father wouldn't allow her to got outside. On one occasion, when her mother let her outside, her father gave her a black eye, but acted as if nothing happened. Pamela spoke with her mother, who told her she loved to garden, as if they spoke back to her when she was really quiet.

Despite the abuse continuing, every time her father hit her mother, he would buy flowers for forgiveness, and her garden would grow. Pamela realized that flowers could manipulate people, but her mother would be killed by her father, and buried under the garden, where her body replenish the plants. Pamela was sent to live with a relative father her father was trailed for committing domestic violence and murder.

After an accident turned into the criminal known as Poison Ivy, Pamela was more an extremist willing to protect the earth from humanity and to be precisely pollution, Even after doing criminal activities Poison Ivy, was not without her redeeming qualities, she help Batman and the community of Gotham during the events of No Man's Land and most recently tried to stop the Dark Knights and (Albeit unknow to her) being a pawn from Barbatos.

Even she has saved Harley Quinn (her best friend) from the Joker and other homicidal maniacs who try to attack her. She also started to regret the lives she had taken, and causing the death of Batman, having him be revived. Pamela became focus on saving nature and the green, but saving humanity by making them be peaceful people.

While a extremist, Poison Ivy is more recently an anti-heroine than villain, she can be respectful and honorable if they help her well.

To his enemy, She can be seductive, inescrupulous and flirtatious, and villainess like Harley Quinn, has fallen to her charm, overall and given the hard life she has taken, Poison Ivy is more mellowed to her few friends and enemies. 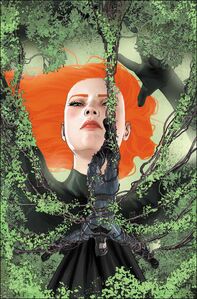 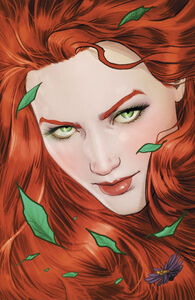 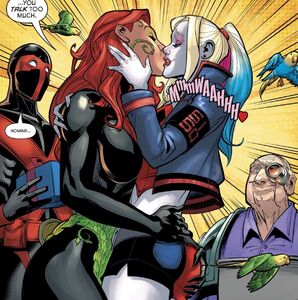 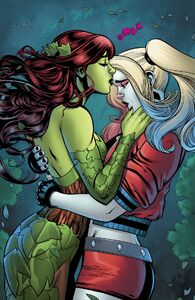 Retrieved from "https://hero.fandom.com/wiki/Poison_Ivy_(Prime_Earth)?oldid=1841284"
Community content is available under CC-BY-SA unless otherwise noted.