Dad (by his children)

One Hundred and One Dalmatians (1961)

Farther to the Dalmatian puppies

Abnormal intelligence for a dog

Spending time with his children.
Being with his mate, Perdita.

Pongo Dearly-Radcliffe-Dalmatian is a British Dalmatian and the main protagonist in Disney's 1961 film One Hundred and One Dalmatians, it's 1996 live action film, and a supporting character in it's 1997-1998 television series and the film's 2003 sequel 101 Dalmatians II: Patch's London Adventure. He is the husband of Perdita, the father of 15 puppies, the adopted father of the other 84 puppies and the paternal grandfather of Domino, Little Dipper and Oddball. He was also the narrator of the first film.

In the animated franchise, he was voiced by the late Rod Taylor in the original film, Michael Gough in the animated storybook game, Kevin Schon in the TV series, Samuel West in Patch's London Adventure, and Michael Bell in House of Mouse.

In the animated storybook, he narrates pages 1 and 3, and on page 6, he and Perdita sing "Twilight Bark".

Pongo originally lived in a flat in London with his owner (pet in Pongo's view) Roger Radcliffe. Tired of bachelor life, Pongo wishes to find Roger a significant other. As he watches other dogs and their owners walk past, Pongo notices a female Dalmatian named Perdita walking with her owner Anita. Deciding that Anita would be perfect for Roger, Pongo secretly changes the time on Roger's clock to make him think that it is time to take Pongo a walk. Pongo leads Roger to a park where they run into Perdita and Anita. Pongo and Perdita's leads get tangled around Roger and Anita, causing them to fall into a pond. Fortunately, they see the funny side and eventually fall in love and marry as do Pongo and Perdita.

Sometime later, Pongo and Perdita become parents to fifteen puppies. However a few months, whilst Pongo and Perdita go out for a nightly walk with Roger and Anita, two men named Jasper and Horace, under the orders of Anita's old school friend Cruella De Vil, subdue their maid Nanny and steal the puppies. News spreads of the missing puppies. After seeing little hope of the humans finding their puppies, Pongo uses the Twilight Bark to spread the news to the other dogs in London. Pongo and Perdita eventually learn that their puppies are being kept in by Cruella in an old mansion along with 84 other Dalmatian puppies to make into a fur coat. With help from a dog named Colonel, a cat named Sergeant Tibbs, Pongo and Perdita are able to rescue the puppies and they begin to travel back to London. They are pursed by Cruella, Jasper and Horace, but are able to outwit them.

Pongo, Perdita and the puppies eventually return home and reunite with Roger, Anita and Nanny, who decide to keep the other 84 puppies.

In this 1996 live action film, Pongo's role remains the same as it was in the amimated film except that he does not speak.

In this sequel television series, Pongo along with Perdita, their 99 puppies, Roger, Anita and Nanny, leave London and move to the countryside and live on a farm which they name Dearly Farm.

Pongo has a supporting role in the series where he is shown to be a great husband to Perdita and father to the puppies.

In this sequel to the 1961 film, Pongo and his family are moving to the countryside, but afterwards notice that their son Patch is missing. Pongo blames himself for Patch's disappearance as he had lost count of the puppies, but Perdita tells him not to blame himself. Pongo, Perdita, Roger and Anita head back to London to find Patch and eventually do and happily reunite with him.

Although Pongo does not make a physical appearance in the series due to it taking place over fifty years after One Hundred and One Dalmatians, a photo of him and Perdita is seen on the staircase the titular house, which is the home of Dylan (who is a descendant of Pongo and Perdita via his mother Delilah) and his family.

Pongo shows to be a loving husband, a devoted father, and a loyal pet. He views his pet Roger as his closet friend and the true reason Roger and Anita met. Even after becoming a father, Pongo remains care-free. He is extremely protective of his wife and children. He was happy and sweet to his children as the main protagonist. He even faced the villainous Cruella De Vil.

Pongo is a dalmatian with white fur, black spots, black ears, a black nose, brown eyes and a red collar with a gold license

However, in some book adaptations of the film and in 101 Dalmatians: Escape from DeVil Manor, Pongo is seen wearing a blue collar. 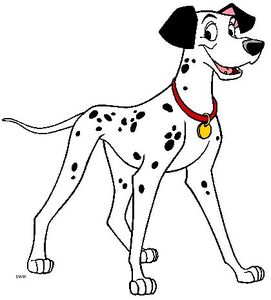 Pongo with his mate, Perdita 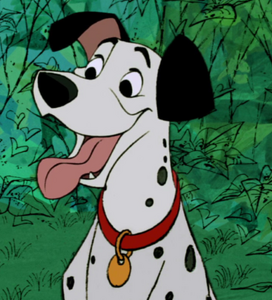 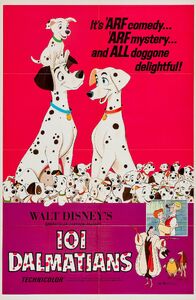 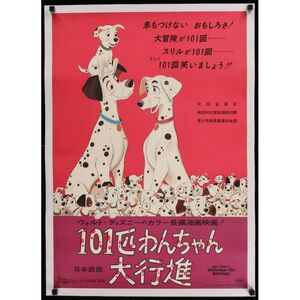 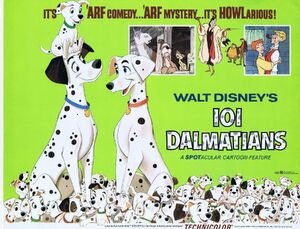 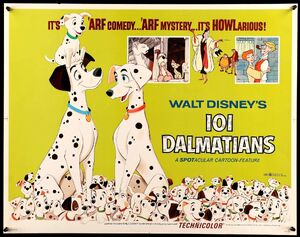 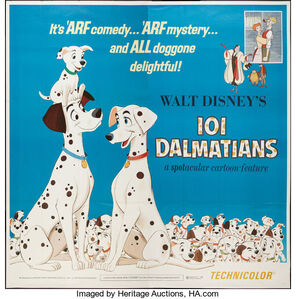