Hanging out with Star
dancing with Star

Princess Warrior
Flying Princess Lilacia Pony Head, or just simply Pony Head, is a princess from the Uni dimension and one of Star's best friends. She currently attends St. Olga's Reform School for Wayward Princesses because of her rambunctious behavior. She serves as a supporting protagonist

Pony Head is literally the head and neck of a unicorn without a body. She has light blue fur, a pink mane (which constantly flows and flutters), teal eyes with gold stars for pupils, and a teal, striped horn. On each side of her neck, there is a pink heart. Sparkles and glitter tend to fall out of the bottom of her neck.

Pony Head can be quite bold and rash, as well as sarcastic and laid-back. She can be competitive, as seen when she is playing video games with Marco. Though she can be rude and underhanded, she is loyal to her friends and willing to endanger herself to help them. She is also quite possessive, initially trying to get rid of Marco so she could have Star all to herself.

Pony Head can use her horn to shoot laser beams or function like a drill. She can also levitate or fly at high speeds. In "Sleepover", it is shown that she is strong enough to carry several people at once (though with great difficulty). In "Pizza Thing", she uses her horn to magically restore a crushed car, then has it drive itself back to its owner. 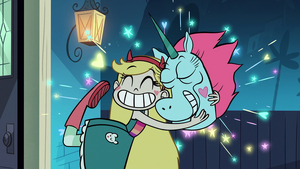 Star and Pony Head are Hugging. 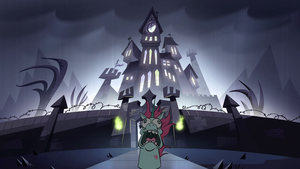 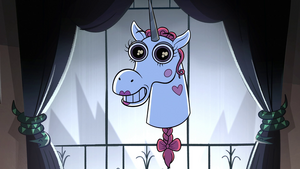 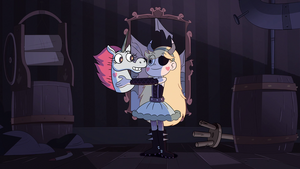 Pony Head is back to Normal.
Add a photo to this gallery

Retrieved from "https://hero.fandom.com/wiki/Pony_Head?oldid=2187331"
Community content is available under CC-BY-SA unless otherwise noted.