Heroes Wiki
Register
Don't have an account?
Sign In
Advertisement
in: Articles under construction, Female, Anime Heroes,
and 30 more

Ponyo on the Cliff by the Sea

Ponyo (birth name Brunhilde) is the main female protagonist of the 2008 animated Studio Ghibli film, Ponyo on the Cliff by the Sea.

Ponyo is an extrovert, tending to go outside when her father is distracted doing his magic.  She also pleased when Sosuke finds her while he is playing by the sea by his house and frees her from a jar, and she repays him by licking his cut, and they bond and become friends.  Ponyo does not like her father at first, which is why she runs away from home at the start of the movie, and she is also rambunctious, causing trouble around the house after Sosuke adopts her.  Soon, she abandons magic and decides to live by Sosuke's side as a part of his family. She is a fish at first but becomes more humanlike when Sosuke cuts his finger and she licks his cut, healing him.

Her favourite food is ham.

At the start of the film, Ponyo and her sisters watch as their father performs magic at their home underwater. Ponyo leaves off while her father is in the middle of his ritual. Soon, she finds her way to Sosuke's house. Ponyo gets her head stuck in a jar en route, and nearly passes out on the shore as she struggles. Sosuke finds her on the beach and breaks the jar, cutting his finger in the process. She licks Sosuke's finger, healing him, and they become friends almost immediately.

Sosuke takes Ponyo to his school, but Kumiko barges in on him while the boy is outside. She mocks Ponyo for because "she is the most boring fish in the world." An irate Ponyo then scares her off by attempting to spray Kumiko's dress. Sosuke then states that was Kumiko's fault, since she judged Ponyo by outer appearance. Sosuke then shows Ponyo to the elders, and she sprays one for accusing her of plotting to cause a tsunami. Sosuke then has to dump Ponyo into the ocean against his will, but eventually decides she will stay by his side. However, Fujimoto, Ponyo's father, takes her back into the ocean with him, much to Sosuke's dismay.

Back at his house, Fujimoto then tells Ponyo that she cannot be human and magic at the same time. Ponyo, regardless, tries to escape, but Fujimoto manages to sedate her by injecting himself with his potions and using their power to drain her of her energy before placing her bubble inside the one her sisters are in.

Fujimoto then leaves to make his next elixir, but Ponyo manages to escape with her sisters's help. She then decides to run off and find Sosuke. En route to their house, Sosuke and his mother, Lisa, find Ponyo running on the water. The two kids meet up at the house exactly one day after their forced separation, whereupon Ponyo becomes fully human.

After their reunion, Lisa drags the two kids inside the house. She then offers that Ponyo helps her and Sosuke around. For dinner, Lisa makes soup and adds Ponyo's favourite food, ham. She then goes to the Senior Centre to evacuate the elders.

The next day, Sosuke's mother does not come home. His friend Ponyo startles him awake, causing their heads to collide as Sosuke wakes up from his rest (though she does not get hurt). Sosuke and Ponyo set off to find his mother in a boat Ponyo enlarges (since it was too small), using a candle as their heat source (and attempting to feed a baby a sandwich and some soup en-route). En route to their destination, Ponyo is drained of energy and falls asleep, and the boat reverts to its original size. Ponyo and Sosuke find that Lisa has disappeared (Her car is there, but she herself is gone.), but then, an energy-drained Ponyo reverts to a fish, much to Sosuke's dismay. The duo and the elder whose clothing Ponyo had sprayed earlier in the film are then whisked underwater when Fujimoto appears, demanding their aid.

It turns out Lisa did survive and is in an underwater area where air-breathing creatures can breathe underwater. The kids and Lisa meet up with Ponyo's mother, the sea goddess. She then announces that Ponyo has to give up magic to become human, which the latter does when the kids make it to the surface. Ponyo then kisses Sosuke and reverts to her human form. 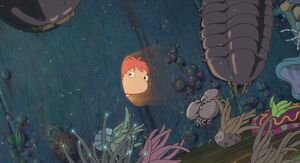 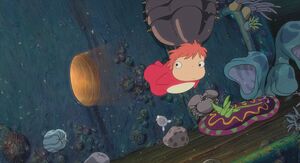 Ponyo trying to run away from home. 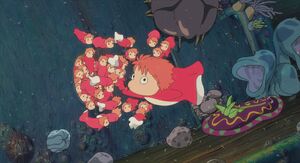 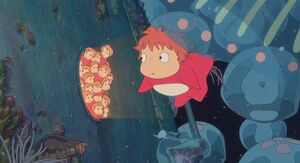 Ponyo with her younger sisters. 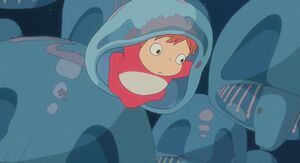 Ponyo running away from home. 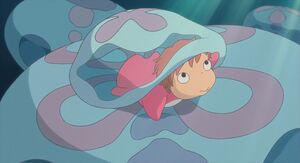 Ponyo on a jellyfish. 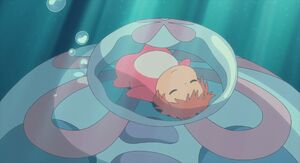 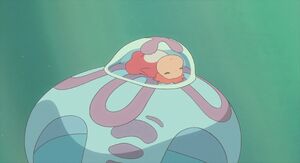 Ponyo sleeping on the jellyfish. 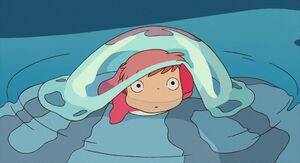 The next day, Ponyo finds herself near a human village. 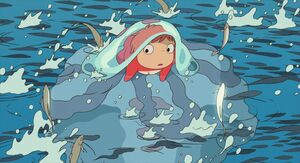 Ponyo seeing a boat coming towards her. 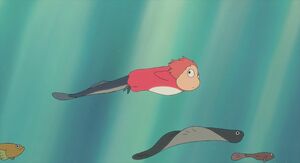 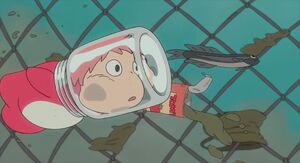 Ponyo trying to avoid getting caught in a fishing net. 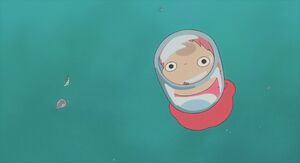 Ponyo stuck in a jar. 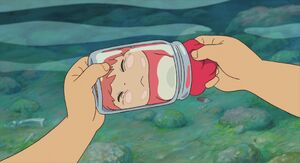 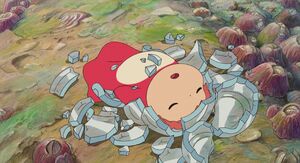 Ponyo free from the jar. 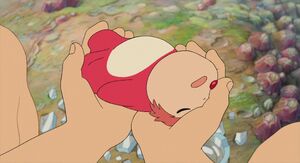 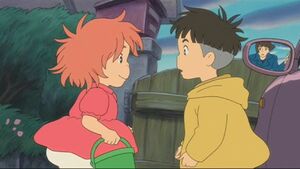