Heroes Wiki
Register
Don't have an account?
Sign In
Advertisement
in: Articles under construction, Animals, Male,
and 9 more

?
Poochy is a rat who is Bob's favorite pet in the film Minions.

Poochy is a strong rat, and has a crooked tooth. Poochy used to live in a sewer under Buckingham Palace and Westminster Abbey, and after it meet Bob, it follows and is brought around by him in many occasions.

After Kevin, Stuart, and Bob escape from the dungeon under Buckingham Palace, they manage to go to Westminster Abbey through the sewer. On their way, Bob finds a rat and he calls him Poochy. Bob later finds a garland in a funeral and the Minions decide to give it to Scarlet Overkill as apology. When they move on, Bob says that Poochy can follow him, so it runs after Bob.

When they arrive Westminster Abbey, the Minions find out they are unable to reach Scarlet, so Kevin wants to climb up to a wall. Bob is sad because he is unable to bring Poochy, so he sings Auld Lang Syne to it and is soon pulled away by Kevin. Later, after the fight between Kevin and Scarlet, the Minions think that Kevin is killed in the explosion. Stuart finds that Poochy appears and bring it to Bob to calm him down; at first, Bob is pleased but soon cries for Kevin again. Actually Kevin doesn't die and he flies back with his giant outfit as parachute.

Poochy is always carried by Bob in following plot. In the post credit, Bob accidentally scatters candy everywhere on the ground, which attracts Poochy, so Bob excitedly chases it around.

Poochy is also brought to the stage by Bob during the ceremony.

Minions: The Rise of Gru 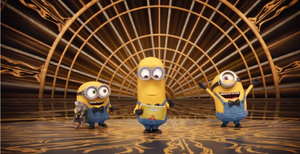 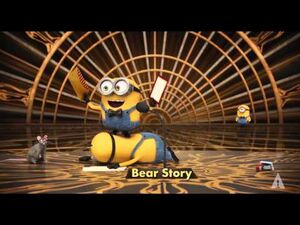