Poof is the son of Cosmo and Wanda, whose most notable spoken word is "Poof", which Timmy decides upon as his name. He is voiced by Tara Strong in cartoon and live action, "Fairly Odd Movie" and voiced by Randy Jackson for live action movie while he later speaks in the cartoon in the episode, School of Crock

Poof is small round fairy baby with purple eyes. He has one hair on his head which is in the shape of a 'P'. He carries a magical rattle.

He used to be quite innocent and quiet. He later became smarter and he is very optimistic. He is also heroic, brave, friendly and quite short-tempered. He doesn't like Timmy's pink hat and he had asked to be Foop's friend. He is headstrong like Wanda. Poof is now able to say many English words, instead of just "Poof poof". He's nearly always cheerful. Quite a lot of characters like him and smile when they see him.

He was born to Cosmo and Wanda in the episode, "Fairly Odd Baby" after his parents decided that they wanted to have a child despite the destruction that his father had caused as a baby.

While Poof was absent from the beginning of Season 10, the reason being to prevent too many characters from being in one episode, he returns in Certifiable Super Sitter, which is his only appearance in Season 10.

In "Fairy Old Parent", Poof is assigned to his very first person as a fairy godparent as his own, for miserable old people; such as Mrs. Crocker. He grants her wishes but became overworked and exhausted, returning to Cosmo and Wanda. 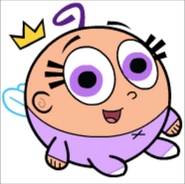 Retrieved from "https://hero.fandom.com/wiki/Poof?oldid=2237834"
Community content is available under CC-BY-SA unless otherwise noted.