Pop-Eye
The One-Eyed Sailor
Uncle Popeye (by his nephews)
Pooh-Pooh (by Toar)
Mister Popeye or Runt (by Bluto)
Mr. Eye (by Nana Oyl)
Popito
King of Popilania
Ugly Kidd
King of the Mardi Gras
Greatest Sailor in the World
Sonny Boy (by Pappy)

Popeye is the titular protagonist of the Popeye series of cartoons, comic books and even the live-action movie. He is portrayed as a tough, but relatively harmless sailor who has no time for troublemakers or bullies and is in love with Olive Oyl.

In the 1980 live-action film Popeye, he was portrayed by the late Robin Williams, who also portrayed Mork in Mork and Mindy, John Keating in Dead Poets Society, Peter Banning in Hook, Daniel Hillard in Mrs. Doubtfire, Alan Parrish in Jumanji, Jack Powell in Jack, Phillip Brainard in Flubber, Lance Clayton in World's Greatest Dad, Genie in Aladdin, Ramón and Lovelace in the Happy Feet film series, Rainbow Randolph in Death to Smoochy, Fender Pinwheeler in Robots, Batty Koda in FernGully, and Sean Maguire in Good Will Hunting.

40 years ago, Popeye was born as the son of Poopdeck Pappy until his father got missing. He went to find his father from Goon Island.

Popeye finds himself under attack on an almost daily basis by the brutish Bluto, who is also in love with Olive Oyl but is a much bigger, meaner individual than Popeye and thinks he can win her simply by beating Popeye up or causing trouble.

Of course, Bluto remains overconfident of his size and strength and seems to always forget Popeye's special power - whenever Popeye eats spinach, he transforms into a virtually unstoppable super-strong sailor whose strength knows no bounds. Through the power of spinach, Popeye has defeated Bluto time and time again and won the heart of Olive Oyl.

In the live-action movie, in which he is played by the late actor Robin Williams, Popeye despises eating spinach. However, when he is forced into eating it anyway, he, like his cartoon counterpart, becomes super-strong and beats up Bluto.

Differences in Popeye's story and characterization vary depending on the medium. Originally, Popeye got his strength from rubbing the head of the Whiffle Hen, changing to spinach by 1932. Swee'Pea is definitively Popeye's ward in the comic strips, but he is often depicted as belonging to Olive Oyl in cartoons. The cartoons also occasionally feature members of Popeye's family who have never appeared in the strip, notably his lookalike nephews Peepeye, Pupeye, Pipeye, and Poopeye.

There is no absolute sense of continuity in the stories, although certain plot and presentation elements remain mostly constant, including purposeful contradictions in Popeye's capabilities. Popeye seems bereft of manners and uneducated, yet he is often depicted as capable of coming up with solutions to problems that seem insurmountable to the police or, most importantly, the scientific community. Popeye has, alternatively, displayed Sherlock Holmes-like investigative prowess (determining, for instance, that his beloved Olive was abducted by estimating the depth of the villains' footprints in the sand), scientific ingenuity (as his construction, within a few hours, of a "spinach-drive" spacecraft), or oversimplified (yet successful) diplomatic arguments (by presenting his own existence—and superhuman strength—as the only true guarantee of world peace at diplomatic conferences). Popeye's pipe also proves to be highly versatile. Among other things, it has served as a cutting torch, jet engine, propeller, periscope, and, of course, a whistle with which he produces his trademark toot. Popeye also on occasion eats spinach through his pipe, sometimes sucking in the can itself along with the contents. He seldom appears to use it to smoke tobacco.

Popeye's exploits are also enhanced by a few recurring plot elements. One is the love triangle among Popeye, Olive, and Bluto, and the latter's endless machinations to claim Olive at Popeye's expense. Another is his near-saintly perseverance in overcoming any obstacle to please Olive, who often renounces Popeye for Bluto's dime-store advances. She is the only character that Popeye will permit to give him a thumping. Finally, Popeye usually uncovers villainous plots by accidentally sneaking up on the antagonists as they brag about or lay out their schemes.

Popeye is a rough and tough sailor with a heart of gold who always does what he can for others and always doing what he thinks is best. He is brave and compassionate, as he will not back down against any foe and give them all he's got, but his compassionate nature makes it so he always tries to "defends the weakerist", as he cannot stand seeing the weak and helpless get abused. He also has a fondness for "poor dumb aminals" and can't stand to see any animal being needlessly abused for no reason, however he has no patience for violent animals who attack defenseless people and other animals for no reason either and he will be quick to turn them into mincemeat for their hotheadedness.

Being a sailor, he has a love for adventure and the sea, and will not pass up the chance to find new mysteries, lost treasures and grand adventures. While he is usually a treasure hunter of sorts, he is not greedy and always does his best to share with others and encourage others to do the same. Popeye has a dislike for things like monsters, ghosts and other such terrors, having faced several himself in his lifetime and would rather pretend they don't exist, as seeing them terrifies him heavily, but he always manages to muster the courage to face off against any foe. Popeye's favorite food is spinach and he always tries to encourage others to eat this healthy green as it is a great source of "strenkth and vitaliky". He loves his sweetheart Olive Oyl dearly despite their rough start and will go to any lengths to keep her safe and make her happy, showing that he is a very chivalrous and romantic man, despite his rough, tough and gruff nature, He also Loves his adopted son Swee'Pea and will do anything to protect and make him happy. 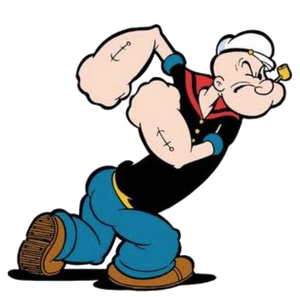 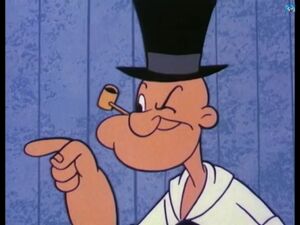 Popeye's appearance in the 1960s 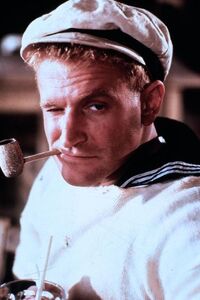 Popeye as he appears in the 1980 live-action Popeye movie he was played by the late Robin Williams. 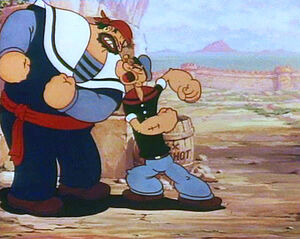 Popeye facing Bluto (who's playing as Simbad the Sailor) 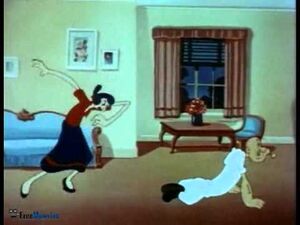 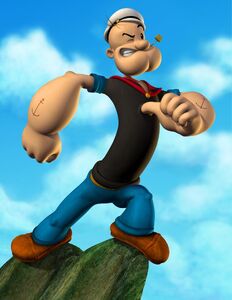