Heroes Wiki
Register
Don't have an account?
Sign In
Advertisement
in: Outdated Articles, One Piece Heroes, Female,
and 23 more

Member of the Kuja

Amazon Fighter
Poppy is a minor character in the Amazon Lily Arc from the anime and manga series, One Piece. She is a member of the Kuja Tribe along with the others.

She was voiced by Hiromi Nishikawa in Japanese version and Michelle Lee in English.

Poppy is a young woman has a tan skin, long black hair with it's over her shoulders on the each sides, and black eyes. She wore a bandages with the thin and it's over on the arms. She has a silver-white top and yellow who's showing in the stomach and cleavage. She has a silver-white short skirt at her matching colors at her front, the pink has her back on the sides, and a yellow string stick about that. She also doesn't have any sandals, shoes, or sneakers, but she has her feet.

Despite her known as her personality, she knows like much other than Kuja tribe shown as a trust of men, little knowledge, inside of the world, and deeps feelings their group of the Gorgon Sisters. After Boa Hancock falls in love with Luffy, Poppy is enjoys to stretch the young Straw Hat Captain's rubbery body as much as the most Kuja does.

Poppy's Haki using of the members of the Kuja tribe, she can be assumed it is a great powerful that Poppy knowns to fight against Pansy. She can't be no longer stronger than Pansy not much great power in the odds at her wager on the stadium.

Poppy first appearance were seems fighting against Pansy will take down on each at a Kuja Arena pair-ups: She had the pair of winners only 1.1 and the Kuja at a stand with willing about 1,500 gor to bet at her.

She and the Kuja enjoying stretching Luffy's rubbery skin.

Later, Poppy, Pansy, and the other many Kuja seems are watching Monkey D. Luffy and Boa Hancock sailing cowards on Momonga's ship. 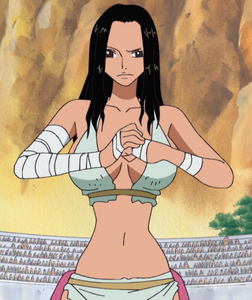