Poppy Peepleson is a major charcter in the Disney Junior TV series Vampirina. She is Vampirina's next door neighbor and best friend.

Poppy Peepleson is very thoughtful, caring and stands up for others when they're upset or worried.

Poppy Peepleson is a young girl around the same age as Vampirina. She has chestnut brown skin and chocolate brown hair. Poppy’s eyes are light brown and have two eyelashes.

She wears an orange long sleeved shirt with a dark pink blouse over the top with three stars over the top, one large and the others small. She also wears purple leggings, a pink bracelet and pink hairband. 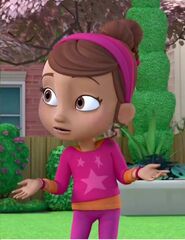 Vee as a human and her best friend, Poppy, as a vampire. 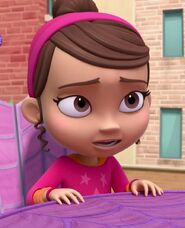 Poppy (left) with Vee and Bridget as one of The Woodchuck Woodsie Troop.
Add a photo to this gallery

Poppy Do The Chicken Dance.

Poppy with Vee, Demi the Ghost and Gregoria, doing the Spine Chiller dance
Add a photo to this gallery

Retrieved from "https://hero.fandom.com/wiki/Poppy_Peepleson?oldid=1935835"
Community content is available under CC-BY-SA unless otherwise noted.