Pops is a greedy owner of a local diner. He often gives tips and advice to Johnny; however, his advice often turns out to be useless, sometimes provoking trouble for Johnny.

His diner's chili is made from rather suspicious ingredients and he serves food made from many animals, such as possums, pandas, cougars, seals, horses, Squid, bald eagles, Raccoons.

Like Carl, Pops was introduced in season two after the show's drastic retooling and remained even after the return to the original format, although he was relegated to brief cameo roles. 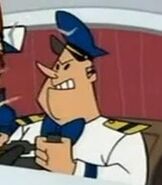