Doing whatever they want

Hanging out with eachother

Stop Pop Team Epic from ending (possibly; succeeded in the manga, failed in the anime)

Popuko and Pipimi are the recurrent protagonists of Pop Team Epic. The two are always seen getting into over-the-top and crazy adventures in a series of often exaggerated skits and parodies.

They are both voiced by many different people, male and female.

Pipimi is a tall, 14-year old girl who wears a sailor uniform, white socks, and brown shoes, which is also what Popuko wears. She has light blue eyes (pink in the first set) and long, navy blue hair that is depicted as black in some material such as the Pop Team Epic LINE stickers. (The manga does not count since it intentionally has no color). She also has a red bow on the top of her head, which she has never removed.

Popuko is a fourteen-year-old girl in seventh grade that has short light orange with bangs. Her hair is held up in pigtails by what looks like yellow ribbons. She has bright yellow eyes that widen and have their irises shurkem whenever she gets angry. Much like Pipimi, Popuko is usually seen wearing a sailor outfit with white socks & brown shoes.

Although she can occasionally behave stern and direct, Pipimi is typically the calmest out of the pair and almost never gets upset. For example, in one strip which also got adapted into a scene in the anime, Popuko punched her repeatedly, but she effortlessly remained calm and didn't act upset in the slightest.

She is the nicest one in the duo and often is seen stopping Popuko's dangerous antics. However, at the same time, Pipimi still shows murderous intents in very calm manners, which she seems to think are perfectly normal. She also goes for the more action packed and violent genres.

When it comes to her pal Popuko, Pipimi sometimes her short-fuse against others for her own benefits. Despite this, she is shown to deeply care about her and often praises her, and even goes as far as to possibly harm other girls who would mock her.

Also, while in a conversation, there's a chance that Pipimi might zone out and think of Hellshake Yano.

Contrasting to Pipimi's much calmer persona, Popuko is very short-tempered and often becomes violent with she gets mad. She has proven to be borderline sociopathic and has even killed people before. But, at the same time, when she isn't infuriated, she has the tendency to get very emotional and obviously cares about her companion Pipimi. For instance, in the eleventh episode, when she somehow turned into a tree, Popuko was noticeably sad.

Popuko seems to enjoy performing. In the manga, she had two YouTube channels and attempted to create a music video. In fact, in one Pop Team Story, she even became an idol. 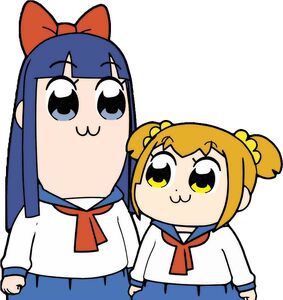 Hey! Hey! Are you upset? 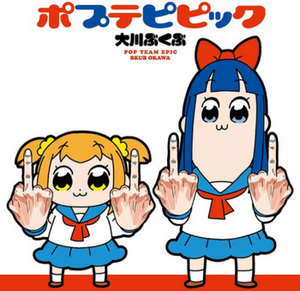 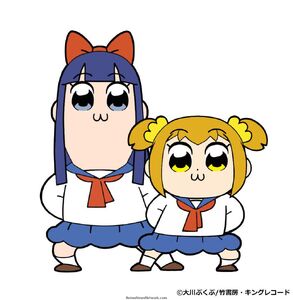 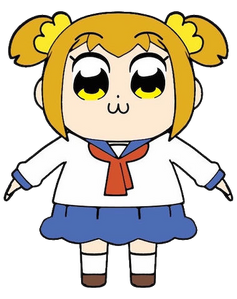