Porky Pig is the tritagonist in the Warner Bros. Looney Tunes and Merrie Melodies series of cartoons. He first appeared in the 1935 Merrie Melodies cartoon short, I Haven't Got a Hat. He was the first character created by the studio to draw audiences based on his star power, and the animators (particularly Bob Clampett) created many critically acclaimed shorts using the fat little pig. Even after he was supplanted by later characters, Porky continued to be popular with moviegoers and, more importantly, the Warners directors, who recast him in numerous everyman and sidekick roles.

He is known for his signature line at the end of each short, "Th-th-th-that's all folks!" The slogan had also been used by both Bosko and Buddy and even Beans at the end of every Looney Tunes cartoon. In contrast, the Merrie Melodies series used the slogan: So Long, Folks! until the late 1930s when it was replaced with the same one used on the Looney Tunes series. (When Bugs Bunny was the closing character, he would break the pattern by simply saying, in his Brooklynese accent, "And Dat's De End!") He is oldest continuing Looney Tunes character.

Porky's most distinctive trait is a severe stutter, for which he sometimes compensates by replacing his words; for example, "What's going on?" might become "What's guh-guh-guh-guh—...what's happening?" In the ending of many Looney Tunes cartoons, Porky Pig bursts through a bass drum head, and his farewell line "That's all folks!" becomes "Th-Th-Th-Th-Th-... That's all, folks." Porky Pig would appear in 152 cartoons in the Golden Age of American animation.

In Duck Dodgers, Porky is the deuteragonist, as the Eager Young Space Cadet.

In The Looney Tunes Show, Porky is the tritagonist. 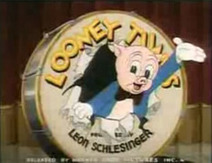 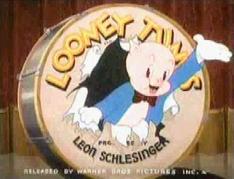 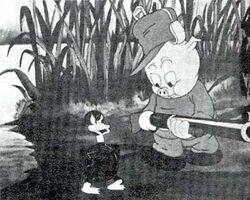 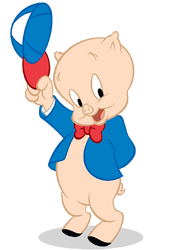 Porky in Looney Tunes: Back In Action

Porky in Who Framed Roger Rabbit

Porky in The Looney Tunes Show 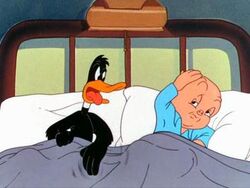 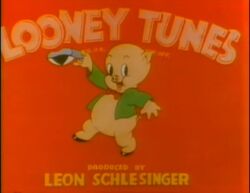 Add a photo to this gallery
Retrieved from "https://hero.fandom.com/wiki/Porky_Pig?oldid=974336"
Community content is available under CC-BY-SA unless otherwise noted.