To be reinstated as an Auror. (succeeded)
Stop Gellert Grindelwald from taking over the world.

Porpentina Esther "Tina" Scamander (née Goldstein) is an American half-blood witch and the deuteragonist in the Fantastic Beasts film series.

She is the wife of Magizoologist Newt Scamander, the older sister of Queenie Goldstein, and the paternal grandmother of Rolf Scamander.

After graduating from IIvermorny, she became an Auror for the Magical Congress of the United States of America.

She is portrayed by Katherine Waterston.

Porpentina Esther "Tina" Goldstein was born August 19, 1901, has a younger sister named Queenie and is a half-blood witch.

She is nicknamed "Tina" by her friends and family, while her sister calls her "Teenie."

She lost her parents at a young age due to Dragon Pox. Afterwards, Queenie and Tina raised each other and maintained a strong, sisterly bond into adulthood.

During her youth, she attended Ilvermorny School of Witchcraft and Wizardry, where she was sorted into Thunderbird house. She became an Auror working for Magical Congress of the United States of America. However, her career fell through when she used magic against Credence Barebone's adoptive mother, Mary Lou, because she was abusing him. The resulting attack on Mary Lou caused Tina to be demoted to a Federal Wand Permit Officer, which was below her ambitious standards.

Fantastic Beasts: The Crimes of Grindelwald

Tina married Newt and moved to the United Kingdom, later Tina gave birth to their first and only son.

In late 20th century, she and her husband lived in Dorset with their pets Kneazles, Hoppy, Milly and Mauler.

Following their grandson Rolf's marriage to Luna Lovegood, Tina and Newt became the paternal great-grandparents of Lorcan and Lysander.

By 2017, she and her husband were still alive at the age of 116 years old and still living in Dorset.

Initially, Tina was a valiant and ambitious Auror, but following her demotion, she became discontented and lost some of her nerve. However, her strong will allowed her to not only push through this but also persist with the job she was given, but also to oppose the Second Salemer No-Majes. Tina initially had a rather neutral opinion about Newt Scamander, considering him a threat to the Statute of Secrecy. However, due to his handsome appearance, tender heart, and endearing personality, and most of all his recognized innocence and the utter sense of right and wrong they shared, she began developing tender feelings for him, which he certainly reciprocated.

For Tina, their exploits together have been a journey of renewal. Her experiences before and during the Obscurial attack on New York have given her more serenity and allowed her to come to terms with her hardships and attempted to find peace and calm within herself. Having grown bolder and happier, she set her sights on finding and redeeming Credence Barebone, hoping to save him from both the Alliance and himself. Unlike her sister Queenie, Tina demonstrated an incorruptible moral code when pushed to the forefront, as she resisted Gellert Grindelwald's persuasive speech, and joined the war efforts to oppose the Dark Lord. 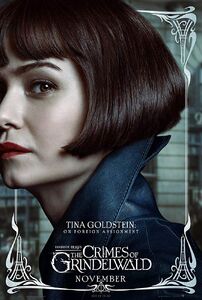 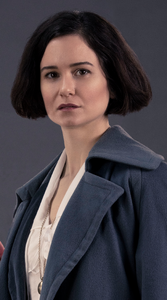 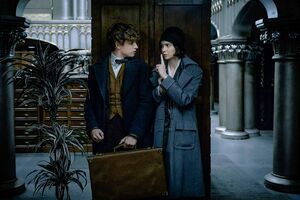