Protect her son as long as she could (succeeded, even though she died many years later).

Monkey D. Garp (acquaintance whom she trusted with the safety of her son, despite him being a Marine)

Portgas D. Rouge was a female character in the anime and manga series One Piece. She isn't a major character, but she's notable for being the lover of Gol D. Roger and the mother of Portgas D. Ace. She loved Roger so much that she cried upon hearing of his execution at the hands of the marines, and she loved Ace so much that she held him in her womb, through sheer willpower, for twenty months, (1 year 8 months), so that the Marines wouldn't find out about him; sadly, this caused her to die immediately after he was born. She and Roger trusted Marine Vice Admiral Monkey D. Garp so much, despite his position, that they allowed him to take in Ace as his grandson, trusting that he wouldn't inform the Marines about Ace's true bloodline.

While Roger likely had many lovers over the years, due to being a notorious pirate and his constant adventures, Rouge was the one that he seemed to deeply love above all else, since he actually had a child with her, one that he new about and cared about at least. Little is known about her, except that she lived on an island called Baterilla, which is also where she eventually died.

She was voiced by Yuki Minaguchi in Japanese and Taylor Anne Ramsey in English.

Portgas D. Rouge was a tall, slender woman, with pale skin, below average sized breasts, (for One Piece standards), eyes that are red around the edges but black in the center, extremely long, silky, pink-blonde hair, and a red flower-ribbin in her hair. During her very few physical appearances in the story, she's always seen wearing a very long, white dress, which is so long that it completely covers her legs and feet. 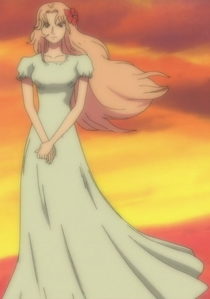 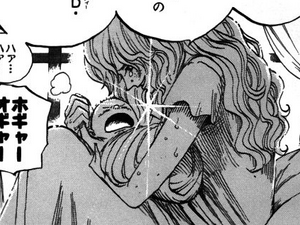 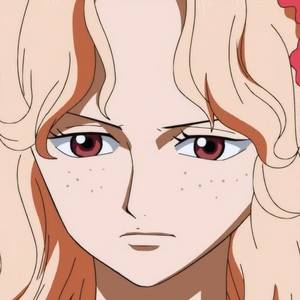