God of the Seas and Earthquakes,


Help Kratos in his quest to kill Ares (succeeded),
Kill Kratos to prevent the fall of Olympus (failed)

Poseidon is the major character of the God of War franchise, and becomes a villain in God of War III.

Poseidon is the son of Cronos and Rhea, and like his other siblings, was swallowed whole by their father in fear that they would usurp him. However, Poseidon's brother Zeus was taken away by Rhea, and raised by Gaia until he decided to rescue his siblings. After being released alongside his siblings, he participated in the Great War to defeat the Titans. In the war, Poseidon aided Hades in defeating the mighty Atlas, with him electrocuting the titan as Hades ripped his soul.

After Zeus ended the war by using the Blade of Olympus, Poseidon was given dominance of seas, as Zeus gained dominance of the skies, and Hades ruled the Underworld. Poseidon took Amphitrite as his wife, and became a hailed Olympian, being worshipped by sailors to grant safe passage when on the seas.

Poseidon would participate in the wager of the Gods, with him having his champion kept secret until later. He had chosen the Theran warlord Herodius, but he was killed by the Spartan Kratos, which infuriated the Olympian. Poseidon sent his Hippocampi a whirpool, and a serpent to kill the Spartans, but they survived as Kratos had killed the serpent.

He aided Kratos for a period of time the vicious beast known as the Hydra terrorized the Aegean Sea, until Kratos, guided by Athena, was called upon. Arriving upon a mess of shipwrecks, Kratos battled the various heads of the Hydra. During this feat, he was met by the great God Poseidon, who granted Kratos the gift of Poseidon's Rage. With this magical ability Kratos was able to cast a stream of lightning through his body into his enemies, destroying them or weakening them enough so that he may finish them off.

This ability would also be of important use while battling against the Hydra King, the strongest and largest of the Hydra’s heads. After destroying the beast, the nightmare the Hydra had caused for many sailors in the Aegean Sea came to an end. Poseidon was also given a section devoted to him in Pandora's Temple. In this section, Kratos obtained Poseidon's Trident, granting him the ability to breathe underwater and dive. Atlantis' Destruction While Poseidon does not appear physically, the god manifests himself through one of his statues. Infuriated with Kratos for Atlantis' destruction, he vows he will never forget Kratos' actions, promising he would one day answer for them.

Also, his personal army, his "children", the Tritons, appear as enemies. Following Kratos opening Pandora's box, Posidon was infected with the evils the box held, and thus slowly succumbed to his own plague, anger. This corrupted him, causing him to side with his corrupted brother, and oppose Kratos. Poseidon attended the alliance made by Zeus, and participated in the Second Great War, forming his Hippocampi after jumping into the ocean, killing the titan Epimetheus. With his Hippocampi, he attacked Gaia with tendrils, forcing Kratos to have kill the creatures, and protect Gaia from harm. Kratos was forced to kill him, gouging out his eyes before snapping his neck, falling into the ocean below. His death caused the sea's to be rendered out of control, and thus flooded most of Greece.

Poseidon failed to prevent Kratos from continuing his war against the Olympians, as his brother Zeus and Hades were killed by the Demigod. Despite the destruction of the Greek pantheon, Kratos gave the world hope by releasing it from his body via the Blade of Olympus. 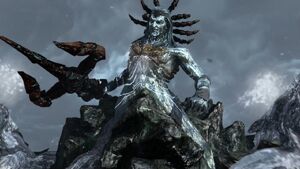 Poseidon in God of War III. 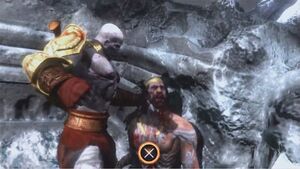 Poseidon being beaten by Kratos.
Add a photo to this gallery

Retrieved from "https://hero.fandom.com/wiki/Poseidon_(God_of_War)?oldid=1701643"
Community content is available under CC-BY-SA unless otherwise noted.