The Biggest Rock-star on the Planet

Celebrity
Powerline is a fictional music singer. He is the biggest pop rock star from the film A Goofy Movie. His voice was provided by Tevin Campbell.

On the last day of school before the summer break, Max Goof and his friends hijack the auditorium stage in the middle of Principal Mazur's speech, creating a small concert where Max performs while costumed as the pop singer Powerline. The performance succeeds in making Max a school celebrity and impressing his love interest Roxanne. Roxanne speaks with Max and agrees to go with him to a party where Powerline's concert will be aired live. Goofy decides to take Max on a fishing trip to Lake Destiny, Idaho. Max tries to tell his father about the party he and Roxanne are planning to go to, but Goofy refuses to let him go, saying that there will be plenty of time for parties when he is older. Max stops by Roxanne's house to call off their date, but when Roxanne says she will just have to go with someone else, Max fabricates a story about his father knowing Powerline. He tells her that he will be on stage at the concert with Powerline.

Goofy and Max arrive in Los Angeles on the night of the concert, but are accidentally separated. Goofy is pushed into an electrical ball and flies out onto the stage where Powerline is performing his hit song "Eye to Eye". As convinced by Max, Goofy does the Perfect Cast technique in a freestyle version as a dance style, and everybody is impressed by it, including Powerline, who then also performs it as well. Max is chased by a security guard up onto the stage's lights, but Max crashes down onto the stage between Goofy and Powerline much to their shock. The three break into dance with everyone cheering for them. Roxanne, Stacey, P.J., Pete, Bobby, and others watch the concert from various televisions and are surprised by their performances. 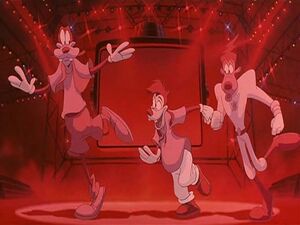 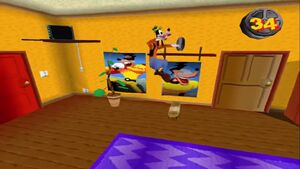 Powerline's cameo in the posters 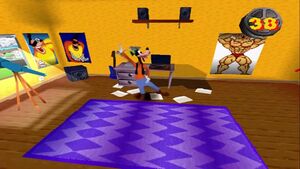