The Powerpuff Girls Z are a group of puffed teenage human girls named after a show in Japanese. The group are Hyper Blossom, Rolling Bubbles, and Powered Buttercup.

The plot of the anime differs much from the original series. The Professor Utonium was experimenting while his son Ken Kitazawa/Utonium created Chemical Z (a variant of his father's Chemical X) when a local restaurant specialty fell into the Chemical X. Ken uses the chemical to destroy an ice glacier and avoid an ecological disaster. The impact causes white and black Z-Rays fly across the skies of New Townsville. The white lights hit Blossom, Bubbles, and Buttercup transforming them into The Powerpuff Girls. Those hit with the black light became bad guys of the series. After defeating Mojo Jojo, Mr. Mayor assigned them to be the heroines of the city. They are called to action using the cry of Ken Kitazawa's robot pet puppy, Poochi.

(Note: Most characters in the anime are based on their American counterparts. Characters mentioned in this section are those that are either significantly different or not in the American version at all. For those present in both versions, there is also a brief PPGZ section on their main pages.) 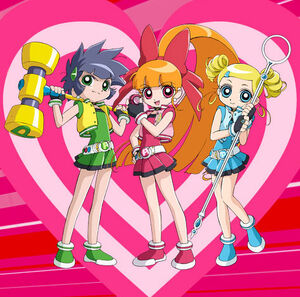 Bubbles and Buttercup look at blossom with that look on her face.

Add a photo to this gallery
Retrieved from "https://hero.fandom.com/wiki/Powerpuff_Girls_Z?oldid=1773673"
Community content is available under CC-BY-SA unless otherwise noted.