Detail-oriented and efficient, Prairie often aspires to work in broadcasting or journalism, presenting "Fairy Tales Today" on Sesame Street itself; and also serving as a correspondent for the Monster News Network in Sesame Street Stays Up Late! ("I'm not a monster, but it is a job in communications"), and directing the broadcast of Elmopalooza prior to being trapped with Jon Stewart and the rest of the crew.

In addition to her pageants, she has been seen in her own segments, chronicling "The Adventures of Prairie Dawn". From Season 33 to Season 37, she hosted and frequently tried to keep Cookie Monster from eating the Letter of the Day. She can also be seen on the TV series Play With Me Sesame. On that series, Prairie Dawn presented artwork submitted by viewers.

Prairie Dawn has appeared in a number of game show sketches. She has been a contestant on at least two of Guy Smiley's game shows -- "The Triangle is Right" and "What's My Letter?"—and was also the subject of another Guy Smiley game show, "What's Prairie's Problem?" She has also been a contestant on "Squeal of Fortune", and has appeared in "The New Here is Your Life" sketch about a glass of milk, and made appearances in "The Letter of the Day Games."

Prairie Dawn is sometimes confused with the blond, pig-tailed Betty Lou, as both based on the Hot Pink Little Anything Muppet. Although the two similar looking girls were rarely seen together on screen, they were often paired in book appearances, such as The Sesame Street Sun.

Baby Prairie Dawn and her mom are two of the main characters in Sesame Beginnings.

Despite regular appearances throughout the 1990s and 2000s, Prairie's role on the show had greatly diminished since season 39, appearing in very little new material outside of a few live appearances. Prairie recently made major appearances in the 2014 video, Monster Manners, a season 45 sketch and the 2015 special, The Cookie Thief. 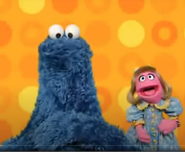 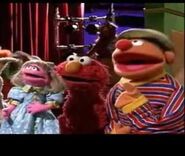 Add a photo to this gallery
Trivia

Retrieved from "https://hero.fandom.com/wiki/Prairie_Dawn?oldid=2189454"
Community content is available under CC-BY-SA unless otherwise noted.