To support and help Surly

Precious is a major character in The Nut Job and The Nut Job 2: Nutty by Nature. She is a pet pug owned by a bank robber until she was adopted by his ex-girlfriend at the end.

She is voiced by Maya Rudolph, who voiced Matilda in The Angry Birds Movie films, aBurn in Turbo, Connie the Hormone Monstress in Big Mouth, Linda Mitchell in The Mitchells vs. The Machines, Betty Hart in Bless the Harts and she played Rita in Idiocracy, Judge Gem in The Good Place and Mom from The Lego Movie 2: The Second Part.

She is a small, sturdy, plump, light brown pug dog with a broad chest, a curly tail, black fur around her copper eyes and black fur on her muzzle and ears, a mole under her right eye, and a red collar around her neck.

She is kind, cocky, caring, smart, prideful, aggressive, gentle, fearless, loyal, heroic, friendly, frolicsome, eccentric, licky, and energetic. When she met Surly and Buddy, she aggressively chases and attacks them from taking the nuts, but unfortunately she was ceased and defeated by Surly himself when had the dog whistle. After that, she became friendly and playful towards Surly due to the under the control of a trained dog to an owner disposition. Later in the first film, she completely be friends with Surly and his friends without Surly with uses and control of the dog whistle. She is a kind dog who constantly loves Surly and loves to lick him or giving him more loving licks on him. She literally appears to be prone to be “excessively licking” Surly with her slobbery tongue, in which dogs actually do to show love or admiration, so it’s normal when dogs do that. 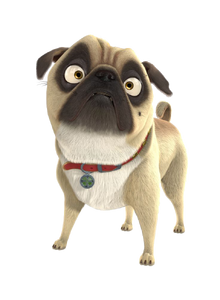 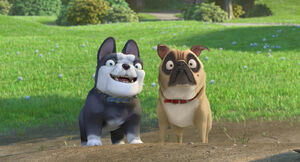 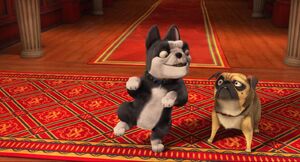 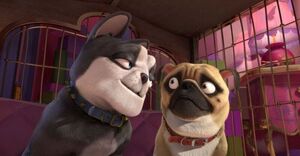 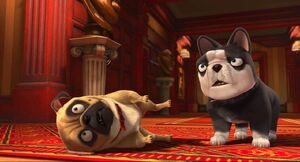 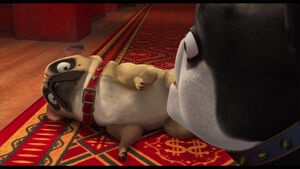 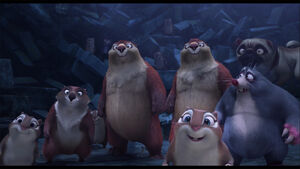