Senior Officer of the Commonwealth Minutemen

Protect the people of the Commonwealth

Sole Survivor (if siding with the raiders)

Preston Garvey is a major character in Fallout 4. He is a senior officer and (initially) the unofficial leader of the Commonwealth Minutemen, a group of volunteer militia that helps defend commonwealth settlements "at a minute's notice".

Originally having successes early in his career, Preston's luck would change after a serious betrayal during a skirmish in the town of Quincy, which left nearly all the minutemen killed. With the help of the Sole Survivor, however, Preston was able to reestablish the Minutemen, and resume protecting the Commonwealth's citizens, no matter their race, against evil fractions such as the Institute.

Preston originally enlisted into the Minutemen at the age of seventeen under the enrollment of Colonel Hollis. Although the minutemen saw their successes at first, their luck eventually began to turn against them as multiple settlement began to lose respect for the militia and eventually turned to more selfish needs.

Eventually Preston and Hollis received a message from a man named Sturges that the town of Quincy had come under siege by a mercenary group known as the Gunners, an event forseen by an "oracle" named Mama Murphy through a hallucination via chems. Nevertheless, Hollis and Preston agreed to help defend the town from the Gunners.

The battle did not go to well for the Minutemen, as the Gunners soon overpowered the militia when one minuteman named Clint betrayed the minutemen and defected to the gunners mid-battle, killing Hollis and forcing the remaining twenty survivors (Preston, Sturges, and Mama Murphy among them) to flee and seek refuge at the nearby Jamaica Plain, then Lexington, and finally to Concord.

During this time, the number of survivors began to dwindle down in number, largely due to attacks by feral ghouls and raiders lead by the gang leader Jared and his right hand man Gristle. By the time the Sole Survivor arrives at the Museum of Freedom in Concord where the remaining Minutemen are currently stationed, only five of the twenty survivors remain standing: Preston Garvey, Sturges, Mama Murphy, and Jun and Mary Long.

After the Sole Survivor wakes up from cryogenic sleep and reacquiant with Cogsworth, they will make their way down to Concord in search of help and supplies. There, they can enter the Museum of Freedom, and make their way towards the main office on the top floor, where Preston and the remaining minutemen and pinned inside by the invading raiders. Preston will greet the survivor warmly, stating that their timing for the situation was "impeccable", before asking a favour from them in return.

Once all of them are eliminated, the Sole Survivor returns to Preston who thanks them for there help, and asks if they know of a nearby settlement that they can seek asylum at. They eventually settle at Sanctuary Hills (the home of the Sole Survivor), where Sturges later asks in the assistance of building a new settlement at the site to help the survivors and any future settlers get accustomed to the land by having the Survivor build beds, water pumps, and defense turrets as well as plant crops. Once completed, the Survivor will need to provide additional resources should any new settlers settle in at Sanctuary Hills.

After the Sole Survivor helps build a settlement in Sanctuary Hills, Preston will begin asking the Survivor to look for potential settlements to establish and potentially support the Minutemen. During this time, Preston will now be available as a companion as well. These settlements may or may not have settlers already located within them.

Those that already have settlers are usually farms or ranches, with the head of the settlement requesting that the Sole Survivor do them a task before they decide to join the Minutemen.

Those that do not have settlers require the area to be cleared of any raiders or ghouls located within them and have a settlement beacon installed within the property.

Retaking and Restoring the Castle

After recruiting several settlements. Preston will ask the Sole Survivor on an important mission to retake Fort Independence (known as The Castle by the Minutemen) from several Mirelurks, which have since infested the fort.

Preston, the Survivor, and three other minutemen will storm the castle, kill all the mirelurks, destroy their eggs, and then confront and battle the Mirelurk Queen. After successfully slaying the beast, Preston and the Survivor will restore power to the radio tower located at the center of the fort by powering it up with several generators.

Not long afterwards, Preston will request the Survivor to return to the Castle once more, telling them that a former minuteman named Ronnie Shaw would like to speak with them there. Ronnie will request that the Survivor clear out the tunnel leading to the entrance of the Castle's basement and use it to navigate inside a locked barracks on the site.

After clearing the tunnel and destroying a rogue sentry bot inside near the exit. Ronnie will ask the Survivor to collect several smoke grenades inside the barracks and build two artillery mortars on the site. She then tells the Survivor to throw a grenade at a nearby building so that one of the artillery shells can test fire.

Infiltrating and Destroying the Institute

Once inside, the survivor must access the terminal located at the location where they entered the Institute for the first time and use a holotype to override the controls and allow Preston, and the rest of the Minutemen to enter the Institute. The group must then travel through a secret facility leading to the Bioscience wing of the Institute, destroying synths and minimizing casualties on the scientists.

The survivor secures the atrium and locating the main terminal to access the nuclear reactor to issue evacuation orders under Preston's instructions, they will encounter Father Shaun (the survivor's son) for the last time, criticizing the survivor before they decide to either kill him or save the last of his experiments.

Once the gate leading to the reactor is opened, the survivor, Preston, and several Minutemen make their way into the reactor, where they have one final skirmish when several hostile synths and place a detonation device onto the reactor. Once completed, they are teleported back to the entrance of the Institute, where Sturges tells the survivor that a boy suddenly appeared just before the group was about to leave, claiming that they are the survivor's child, but is actually a synth version of Shaun. When confronted, the survivor may choose either to allow synth Shaun to travel back to the Commonwealth with them, or leave them to die (Preston will prefer the former solution).

Afterwards, Preston, the survivor, and the minutemen teleport to the roof of the Mass Fusion Building in downtown Boston. There, Preston will give the survivor the honor of activating the detonation device, which when triggered will destroy the Institute and the building located above it in a nuclear explosion.

After the Institute is destroyed, Preston, as well as any companions presented at the destruction will comment above the events, most of which will react positively. 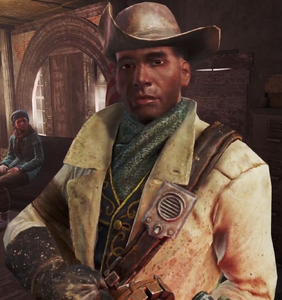