Preyas Diablo or Preyas II - Diablo is Preyas Angelo's devilish alter-ego who appeared in the series of Bakugan Battle Brawlers. Preyas tells Marucho that Preyas II has 2 sides. Preyas Diablo is not an villain in the show, he is a false antagonist despite his trash-talking behavior.

Preyas Angelo/Diablo spawned from a Preyas egg which hatched into two brothers - one good and one evil. Diablo is a tough, devilish Bakugan with an appetite for fiery destruction. Diablo's horned head has fearsome fangs and its winged body is covered in spikes.

Diablo, on the other hand, is a tough smack-talking devil version with a hot temper to match. He has opposite Attributes being Aquos and Pyrus. Each switch places, regularly taking turns. While one side is active the other lies dormant and unaware of its surroundings.

Although they were not featured in Bakugan Battle Brawlers: New Vestroia, they appeared in a photo that Mira refers to in Duel in the Dunes.

In Blast from the Past, Diablo appears along with several past Bakugan to prevent Mechtavius Destroyer from destroying New Vestroia. Overpowered, the Bakugan are unsuccessful and Diablo is one of the first to perish.

Because the Brawlers used the Current of Time to go back before Mechtavius Destroyer killed him, he is now most likely living peacefully on New Vestroia. 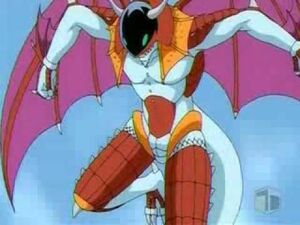 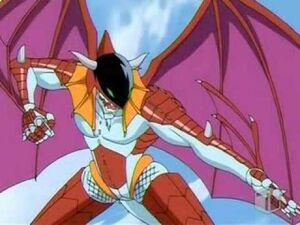 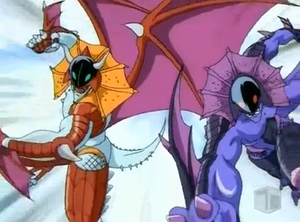 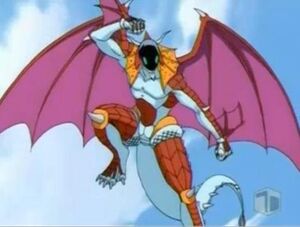 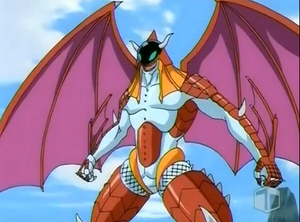