Serving their King and Queen

They are currently led by The Pride Lands' King Simba and Queen Nala.

Excluding the Royal Family, the pride is made up with mostly lionesses. They reside at Pride Rock in the Pride Lands, a kingdom in Africa. In the comics, male cubs appear.

The Pridelanders (also known as Mufasa's Pride due to being ruled by Mufasa) are first seen at the start of the film watching the presentation of King Mufasa and Queen Sarabi's son Simba. They are later seen months later sleeping inside Pride Rock as Simba goes to wake Mufasa so he can have a tour of the Pride Lands.

Three Pridelanders are seen lying outside Pride Rock as Simba goes to Sarabi, Sarafina and Nala to invite Nala to come with him to The Elephant Graveyard.

The Pridelanders are later seen the follow night with Sarabi, Sarafina, Nala and Zazu after Mufasa's brother Scar informs them of Mufasa and Simba dying in a wildebeest stampede (unaware that Scar killed Mufasa and that Simba had fled the Pride Lands after believing that he caused the death). The Pridelanders then watch on in horror as Scar allows hyenas to enter the Pride Lands after becoming King.

Years later, the Pride Lands no longer has food or water, but Scar refuses to do anything about it. After a now young adult Simba returns to Pride Rock, he sends Nala to assemble the lionesses. When Simba confronts Scar, Nala and the Pridelanders back him up, with two lionesses helping Sarabi to her feet after Scar knocked her down. The pride express shock when Simba is forced by Scar into confessing to causing Mufasa's death and watch on as Scar forces Simba off the edge of Pride Rock and prepares to throw him off it. After Scar reveals that it was actually him, not Simba, that killed Mufasa, the Pridelanders join Simba in battling against the evil king and his hyenas.

After Scar's defeat and death, the Pridelanders look on as Simba ascends Pride Rock and roars in victory. The lionesses roar back, accepting Simba as their new King.

The Pridelanders appear in this stage adaptation of the film.

They are first seen during the song "The Lioness Hunt" hunting with Sarabi, Nala and Sarafina, before Simba arrives to ask Nala to come to The Elephant Graveyard with him.

They are later seen during the song "Rafiki Mourns" approaching Mufasa's body following the stampede and sing and shed tears for their fallen King. They are then told by the now King Scar that Simba had perished in the stampede too.

Years later during the song "Shadowland", the lionesses along with Sarabi, Sarafina and Rafiki bid a now young adult Nala farewell as she flees the Pride Lands to find help after a famine strikes due to Scar's poor reign.

After an alive and well Simba returns to Pride Rock and discovers that Scar killed Mufasa, the lionesses take part in the battle against Scar and his hyenas.

The Pridelanders (also known as Simba's Pride due to being ruled by Simba) appears also in the sequel as supporting characters.

Months after the first film, it is revealed that after becoming King, Simba banished any Pridelanders who were loyal to Scar to the Outlands, thus forming the Outsiders, led by Scar's most loyal follower, Zira.

Two Pridelander lionesses are seen when Simba challenges Zira, whose son Kovu (who had been chosen by Scar to be his heir) has encountered Simba's daughter, Kiara. The two lionesses along with Timon and Pumbaa join Simba and Nala in challenging Zira, who attempts to win her way back into the Pride Lands, but Simba stands firm, and the added bulk of the lionesses convinces Zira to walk away peacefully with Kovu. These two lionesses return to Pride Rock with Nala, Timon and Pumbaa whilst Simba stays behind to talk with Kiara.

Years later, the pride wish Kiara (now an adolescent) good luck in her first hunt. When a wildfire starts in the Pride Lands (which was actually started by Zira's older son Nuka and daughter Vitani as part of her plan for Kovu in infiltrate the pride to kill Simba and take over as King), the Pridelanders join Simba and Nala in searching for Kiara, who becomes trapped in the fire, but is rescued by Kovu. After Simba reluctantly allows Kovu to join his pride as thanks for saving Kiara, the Pridelanders return to Pride Rock and go inside for the night.

A few days later, Simba is hurt in an ambush set by Zira. The pride (sans Kiara and Nala) are shown to support Simba when he believes that Kovu was involved in the ambush as they seen at Pride Rock looking angrily down at Kovu who comes to Simba to proclaim his innocence. Two of the lionesses glare angrily at Kiara (who believes that Kovu is innocent) when she tries unsuccessfully convince Simba to listen to Kovu. After Simba exiles Kovu from the Pride Lands and the animals chase him away, Kiara runs forward to intervene, only for two of the lionesses to stop her by blocking her path and give her angry glares for wanting to help Kovu rather than support Simba. She manages to eventually push past them, only to be stopped by another two. After Kovu is gone, the four lionesses witness Kiara try to convince Simba to reconsider his decision, but he refuses and forbids Kiara to leave Pride Rock unescorted. The lionesses then look on as Kiara and Simba argue and when Simba says that he must follow in his father's pawprints, Kiara replies that he will never be Mufasa (suggesting that in Kiara's eyes, Mufasa would have forgiven Kovu and would have seen that the ambush was not his fault). The lionesses are shocked and saddened at this comment and watch a heartbroken Kiara running into Pride Rock weeping and not knowing she managed to sneak out through a hole in the den to look for Kovu.

Later that night, Zira, Vitani and the other Outsiders enter the Pride Lands and battle Simba and the Pridelanders. The pride is seen fighting fiercely against their foes, holding their own despite the obvious strength among the Outsiders. Both sides stop fighting when they see Simba and Zira about to have a one on one fight. However this is prevented by a returning Kiara and Kovu who jump between them. The lionesses look on as Kiara convinces Simba that the Pridelanders and Outsiders are one. Vitani is moved by this speech and decides to join the Pridelanders along with the other Outsiders with the exception of Zira, who still wishes to avenge Scar.

The Pridelanders and Outsiders watch on as Simba climbs down a cliff to save Kiara after she knocked Zira and herself off the cliff. After Zira's death, Simba allows Kovu and the Outsiders to join the Pridelanders again.

The now reformed Pridelanders return to Pride Rock to witness the union of Kiara and Kovu. The lionesses then join the Royal Family in roaring.

Originally, the only other Pridelander lionesses to appear in the midquel series besides Nala and Kiara are two cubs named Tiifu and Zuri, who serve as Kiara's friends.

However in the Season 2 episode in "The Ukumbusho Tradition", several of the pride's adult lionesses appear.

It is also revealed that there were also several male lions in the pride that severed in the pride's The Lion Guard. Three of the most notable Lion Guards was the first one led by Askari, who defended the Pride Lands from a group of evil lions, the one that saved Nala's father when he was a cub and the other was led by Scar, who destroyed them after they refused to help him overthrow Mufasa.

In the Season 3 finale "Return to the Pride Lands" (which takes place after the Outsiders join the pride) which shows four former Outsider lionesses named Shabaha, Kasi, Imara and Tazama who are members of Vitani's Lion Guard, who become the official Lion Guard after Kiara's brother Kion's Lion Guard decide to stay at the Tree of Life.

The Pridelanders role in this film is mostly the same is that of the original film.

It revealed in this film that Simba and Nala were not the only cubs in the pride as in the scene were Zazu takes Simba back to Pride Rock whilst Mufasa leaves to deal with hyenas, another cub is seen briefly near Nala and Sarafina. However the name and gender of this cub is not revealed nor does the cub appear in the film again.

The Pridelanders at Simba's presentation

The Pridelanders sleeping inside Pride Rock

Sarabi, Nala, Sarafina and the Pridelanders looking on in horror as Scar allows hyenas into the Pride Lands. 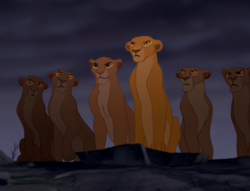 Nala, Sarabi and the Pridelanders stand up to Scar

The Pridelanders watching Simba pin down Scar and calling him a murderer. 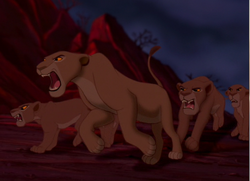 The Pridelanders join in The Battle of Pride Rock 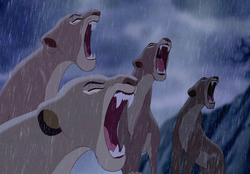 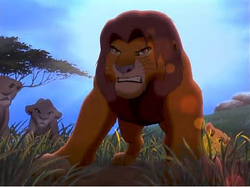 The Pridelanders are shocked and saddened after an enraged Kiara tells Simba that he will never be Mufasa and it will happened if Simba still refusing to reconsider.

Simba and the Pridelanders prepare to battle Zira and the Outsiders. 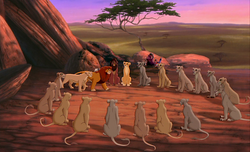 Kiara and Kion with Tiifu and Zuri

Tiifu and Zuri with Kiara, Kion and Nala 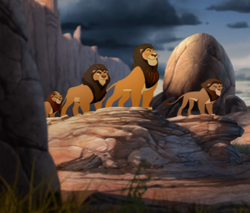