Heroes Wiki
Register
Don't have an account?
Sign In
Advertisement
in: Magic, The Chosen One, Heroes from the Past,
and 8 more

Harnessing the magic power of the Merlin Circle.
Embracing the power of light.
Protecting those from danger.

To aid the Merlineans (including Balthazar Blake and Veronica Gorloisen) in stopping the Morganians' evil plans.

To defeat and destroy Morgana le Fay.
To protect the human race and the world.
To prevent the threat of The Rising from dooming the world of the living.

The Prime Merlinean is a legendary mighty Merlinean conjuror destined to become the successor of the noble wizard Merlin, and the only one who can help his Merlinean allies to defeat Morgana le Fay and her Morganian followers. At the end of Disney's The Sorcerer's Apprentice, Dave Stutler was revealed to be the true Prime Merlinean and used his special power to destroy Morgana le Fay. This mighty spellcaster is known to be a Merlinean with an immense mystic powers, to the point that he or she may not need any magic rings or any other catalyst to use their powers.

Judging from the conversation between Dave and Balthazar Blake, the Prime Merlinean is believed to be a direct descendant of Merlin's bloodline. Because of this, that person's magical aptitude was immense, even surpasses any known spellcasters in existence. Even said also more powerful than Morgana le Fay herself, which is why Merlin said that only the Prime Merlinean can destroy Morgana.

Since sorcerers able to performed magic thanks to their full brain capacity which exceeded that of normal humans that allowed them to manipulate matter and tap on mana (mystic energy of all things) which allowed them to shape reality but need a catalyst as conduit to do so, it's proposed that the Prime Merlinean's brainpowers surpasses those of normal sorcerers which allowed better grasp on mana than any of them and terminated the need of catalysts.

Although, the exact full potential of the Prime Merlinean's powers are not fully explained. Of course, this was due to Dave being the only known Prime Merlinean, and he also learn magic spells under Balthazar's titulege for few days.

Balthazar sworn to his dying mentor that he will find the Prime Merlinean and train him in the battles to come against the dark forces that threaten humanity's future.

Morgana then attacked both Balthazar and Veronica, all in an act of revenge before Dave Stutler, when he finally not only discovered his true power, but also that he is the Prime Merlinean, stopped her fiery blast.

The 2 conjurors fought in a deadly battle and David won by using Tesla Coils, and his Prime Merlinean powers to exploit Morgana's weakness and destroyed her once and for all.

As with the Disney movie the 2010 Nintendo DS videogame based on, the Prime Merlinean is confirmed to be Dave Stutler himself, and he capable to cast magic without the fabled Dragon Ring as well. But the difference is, Dave's power as the Prime Merlinean seemed to be greater and already awakened much earlier: In the prologue, it was possible (though not confirmed) that Dave's Prime Merlinean powers suddenly awakened without warning in the middle of his conversation with Balthazar Blake upon entering the Arcana Cabana occult shop, triggering disturbance on Mana (mystical energy of the world) in the atmosphere of the shop that caused the outermost layer of the magical nesting doll known as The Grimhold unlocked by itself, releasing Balthzar's former friend turned sownr enemy Maxim Horvath. Also, when New York's Chinatown is attacked by monsters much later, Dave found that he can cast magic without the Dragon Ring, something which Balthazar realized much later in the game as back when Horvath kicked him into other dimension, he had no chance to gave him the Dragon Ring. But as with the movie, Dave remained unaware with the full extent of his powers and destiny as the Prime Merlinean until the snobbish illusionist Drake Stone assessed him as one.

Upon Drake Stone's demise, Balthazar eventually revealed to Dave about his destiny as the Prime Merlinean who will put an end to this sorcerous battle between good and evil and encouraging him in resume the struggle against the Morganians. Being the Prime Merlinean, his powers grew that worst Morganians he fought revealed no match for him. The brutish criminal Marrok, the notorious witch Abigail Williams, and the traiot Horvath himself even no match for him. But the greatest challenge at the heart of New York City's Central Park however, Morgana le Fay herself, as her array of magic spells made her a formidable opponent. In spite of this, Dave managed to weakened her long enough to seal her back into The Grimhold, thereby preventing the forbidden magic known as The Rising from ever being successfully performed in the Morganians' plot to overthrow humans with an army of the dead and rule the world of the living.

In this online minigame The Sorcerer's Apprentice: Sorcerer's Fiery Frenzy, Dave must proved himself as the Prime Merlinean by defeating Balthazar's drill automatons before facing Balthazar himself. 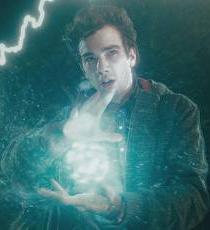 Dave Stutler use both his Merlinnean magic and science to finally defeat Morgana.