Primeape is a Fighting-type Pokémon from generation I. It evolves from Mankey at Level 28.

Ash spotted a Mankey and tried to catch it but failed, angering the Mankey in the process. In retribution, it stole his cherished hat, angering Ash. It evolved into primeape during a battle with team rocket.

Ash later thought of using Primeape in his gym battle against Erika, but due to its explosive temper and disobedience, he decided not to use it. 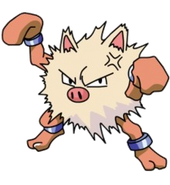 Retrieved from "https://hero.fandom.com/wiki/Primeape?oldid=2058406"
Community content is available under CC-BY-SA unless otherwise noted.