His presence exists throughout the Transformers multiverse, but in some more than others. In some universes, he is not visibly present or mentioned, however one thing that is ever present across all the Transformers universes is the presence of the All Spark, the core essence of Primus himself which in every universe is the source of Cybertronian life.

Before the dawn of time, Order and Chaos existed within an extradimensional entity known as The One. To explore the fledgling universe, he created the astral being known as Unicron, and then subdivided him, creating his twin, Primus. Both brothers were multiversal singularities, unique in all realities, but whereas Unicron could only exist in one dimension at a time, moving between them at will, Primus existed simultaneously in all realities at once. It is suggested, in fact, that the two brothers embody the basic concepts of reality—good and evil, order and chaos—and that their continued existence is necessary for the stability of the multiverse.

As Unicron and Primus went about their appointed task, venturing through the cosmos, it became apparent to Primus that Unicron was a corrupt being, and he took it upon himself to stop the threat posed to all of existence by his sibling. In combat, Primus was no match for Unicron. In cunning, however, he proved himself to his brother's superior when he shifted their battle to the astral plane, and then back to the physical world once more, only to have both their essences manifest within metallic planetoids, leaving them both trapped. It was with this act of sacrifice that Primus hoped to contain Unicron's evil forever. Unfortunately for him, over time, Unicron learned to psionically shape his prison into a giant metallic planet, and Primus followed suit, becoming the mechanical world of Cybertron. When Unicron then learned to transform his planetary form even further, into a gigantic robot form, Primus adapted the idea to suit his own ends—rather than transforming his own body, he would create small beings that would be able to change their shape, like Unicron. After performing a "test run" on the moon of Protos, where he successfully created twelve transforming robotic beings, Covenant he birthed from his own body a group of thirteen robots that possessed the ability to change shape, like Unicron. These were the thirteen original Transformers, each one infused with a fragment of Primus's life essence known as a spark.

The Thirteen were Primus's soldiers in his war with Unicron, which came to its seeming end during a climactic battle in which one of the Thirteen, who would forever afterwards be known as the Fallen, betrayed Primus and became an acolyte of Unicron. The battle ended when the Fallen and Unicron were sucked into a black hole and disappeared from reality. With Unicron gone for now, Primus entered an eons-long slumber, his self-imposed sleep preventing Unicron from detecting him through the mental link the brothers shared. The Transformer race grew, and Primus fell into the realm of legend, with a portion of his power, the Matrix of Leadership, handed down through the generations, serving as the Transformers' ever-present link to their creator.

Evolution of the Primus/Unicron myth

The Primus/Unicron backstory has evolved and been rewritten a good number of times since it first originated in the Marvel Comics series. The version recounted above is the current iteration, which has slowly solidified across a wide swath of media (beginning around the time of Armada). Before the Primus/Unicron mythos reached its present form it went through several distinct versions in the Marvel G1 comics and elsewhere.

The first time we ever heard the Primus/Unicron backstory was in the UK comic continuity, from Unicron himself, in the story "The Legacy of Unicron!", when he recounted it to Death's Head. Per Unicron's telling of events, he was a primal force of evil at the dawn of the universe who led an army of Dark Gods against his mortal foe, Primus, Lord of the Light Gods (note the plural). Events proceeded to play out basically as described above, though the role of the Light and Dark Gods would diminish with each subsequent retelling of the story, until the current version, in which Primus and Unicron are alone and have a unique origin. (Only one of the other gods was ever named—the Chronarchitect. How exactly he factors into the current iteration of the myth is unknown.)

The second time the story was told was in the US book by the Keeper, an ancient mechanoid who guarded Primus's head at the center of Cybertron. This telling is effectively the same as the previous UK story, but mentions that their battle was towards the end of the era of gods, that Primus and Unicron were the last of their respective pantheons, and Primus had to defeat Unicron before he could take his place with the other gods in the "Omniversal Matrix".

The third time the story was told was also in the US Marvel series, this time by Primus, when he gathered all his children together to prepare for Unicron's coming. It was with this telling that we learned that Unicron predated the current universe, and had destroyed the previous universe which existed before the current one. He had slept peacefully, alone in the void of uncreation that remained, until fragments of the old universe that he had overlooked reacted, causing the Big Bang and birthing the current universe. The "sentient core" of this new universe recognized the threat that Unicron posed, and so created Primus to counter his evil and be guardian of the new creation.

The first modern retelling of the origins of Primus and Unicron did not come from G1-oriented media, but from a set of Armada trading cards released by Fleer. It was the backstory printed on Unicron's card which introduced the concept of the two being brothers created to explore the new universe by an extradimensional entity, here named the "Allspark."

This was subsequently expanded on and combined with aspects of the various Marvel Comics stories in Transformers: The Ultimate Guide, published by Dorling Kindersley and written by Simon Furman, who had written all three prior tellings in the first place. Here, the entity Fleer had called the "Allspark" was redubbed "The One," and the modern iteration of the myth detailed above was firmly established, and went on to form the backbone of subsequent fiction such as Universe and Fun Publications' Cybertron comics.

It was also at this point that it was established that Primus could transform from Cybertron into a robot mode like Unicron, but preferred not to, choosing to remain connected to the universe on a planetary level. 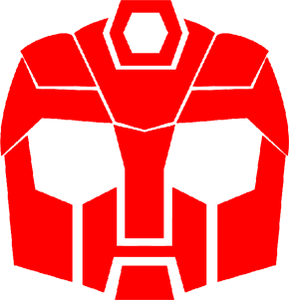 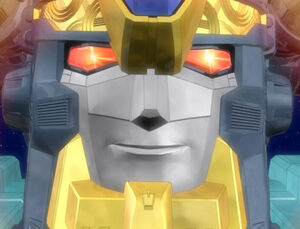