Being King of Zamunda

Teaching His Son to be King

Reconcile With His Long Lost Heir(Succeeded)

Prince (later King) Akeem Joffer is the main protagonist of the 1988 romantic comedy Coming to America and the 2021 sequel Coming 2 America. He is the crown prince and sole heir (later King) of the fictional African nation Zamunda.

He is portrayed by comedian Eddie Murphy, who also played Norbit Albert Rice, Dr. John Dolittle, and Axel Foley, and has voiced Mushu and Donkey.

Akeem was born as the oldest child of King Jaffe Joffer and his wife Queen Aeoleon, rulers of the fictional affluent African country of Zamunda. Although they have a vast amount of servants at their disposition, Akeem starts to grow weary of this and longs to be independent and self-reliant.

On his 21st birthday, Akeem can’t use the restroom by himself after a royal butler calls the servants despite his request to bathe and clean alone. He tells his parents over breakfast that he did not need servants to escort him, to which his father agrees. During his party, Akeem is introduced to the lady that his parents arranged for him to marry, Imani Izzi. When Akeem learns that Imani has been taught to do when he says, he goes outside with his father to chat. Akeem tries to tell his father he wants to marry an independent lady who likes him for who he is as a person, not as a prince, but his father mistakes it for a vacation. Jaffe agrees to give 40 days before the wedding afterwards. When Akeem and his royal retainer Semmi cannot decide whether to go to New York or Los Angeles to a find a lady, they flip a Zamundan coin and choose New York. And then, they decide to go to Queens, mistakenly believing it where they can find a queen.

Once in Queens, Akeem and Semmi disguise themselves as foreign exchange students and rent a tenement apartment. During his time in Queens, he has dates with several hoping to find suitable wife who is independent, but to no avail. One night, Akeem and Semmi go to a Black Awareness rally, where Akeem witnesses a lady named Lisa McDowell explain the importance rebuilding their community and asking to give donations to assist that cause. Akeem makes a large donation and falls in love with Lisa, believing she’s the lady he’s finding. Then Akeem and Semmi get jobs at Lisa's father, Cleo's, restaurant, McDowell's, a McDonald's ripoff.

Akeem proves to be an asset to Cleo and his business while also learning more of hard work after observing commoners' livelihoods. After Semmi uses their travel money to furnish their living with lavish items, Akeem confiscates his money and uses it for greater causes, causing Semmi to make the Joffers travel to the United States and expose Akeem as a prince.

At first, Cleo disapproves of his daughter's relationship with Akeem, but he changes after he’s met by the Joffers, who discovers Akeem's efforts now and changes in character but warns him not to alert Akeem of their arrival in order to not destroy his date with Lisa. Then, Cleo bonds with Akeem one evening but this is ruined by the unexpected arrival of the Joffers. Lisa breaks up with Akeem after she discovers his identity.

Later on, Akeem's joy returns on his wedding day when he discovers that his supposed arranged bride-to-be is not Imani but instead, Lisa. The Zamundans applaud them and Lisa chooses to be part of the royalty.

When The Married Couple is Celebrating their 30th anniversary, The dying King Joffer suddenly summons the prince on his deathbed. The King and His shaman named Baba reveals to Akeem that he has an son that he has never known about. He also claimed that Akeem must have an male successor to the throne (therefore why he planned this without acknowledgement and Akeem only fathered Daughters) or the Country will have an hostile takeover by Nexdoria's Dictator, General Izzi(The Brother of former Akeem's planned wife Imani). 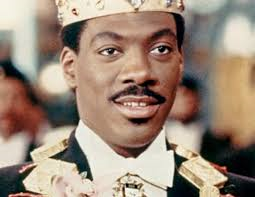