Protector and Prince of his village

Find a way to get rid of his curse before it consumes and kills him.

Stop the conflict between Irontown and the Forest and help them find a way to live together in peace (both succeeded).

Kaya (possibly his sister, but he could have used the term in a non-literal way since they were formerly betrothed to one another)

Nago (briefly after becoming a demon)

Prince Ashitaka is the main protagonist of the film Princess Mononoke. He is also a warrior who met San and then became great friends with her eventually. Through out the film, he was also looking for a cure to a curse he got from a boar that was cursed as well. At the end of the film, he and San were cured from the curse after they returned the head of the forest spirit to him, which some evil men who were working for Eboshi tried to take.

In Whole Hog Theatre's stage productions he was portrayed by Maximillian Troy Tyler.

Ashitaka is a 17-year-old boy. He has long hair that is tied into a bun, but he cuts it off after he is told to leave the village. His clothing consists of a blue top and peach-white pants, as well as brown bottom warmers and shoes made out of fabric. He also wears blue arm sleeves and a red hood to cover his face. He wears a cloak made out of hay for a small portion of the movie. He wears his sister's crystal dagger before he gives it to San. After San's attack on Irontown, Ashitaka has a slash scar on his left cheek where San slashed him with her dagger.

Ashitaka is very stern and determined to achieve his goals, not allowing his setbacks to stop him from curing his curse and saving his village. He is also extremely curious in nature, wanting to discover who San truly is after witnessing her sucking venom out of one of the wolves. Despite his hard outer shell, Ashitaka is also very kind and only wishes for the best outcomes for both sides, not wishing for either side to shed blood in destructive wars, and wants peace between the forces of man and nature.

Ashitaka is seen in the beginning of the film telling three women to run as their is something afoot. He goes to a watchman on a tower, who states that a being not human is in the village. The creature is revealed to be a demon with a black and red substance around it's body. Ashitaka scares his elk, Yakul into running away before the demon chases Yakul. When the demon chases after Yakul it topples over the watchtower making Ashitaka grab hold of the watchman and saves him from his death. Ashitaka rides his elk, with the intent to kill the demon. In his fight, his arm gets infected when the demon's substance grabs hold of it. Ashitaka kills the demon, and gets medicine from the elder while she asks the demon to die in peace and bear no hatred on their village. Later that night, he is told that the mark left by the demon will spread and kill him unless he finds a cure elsewhere. 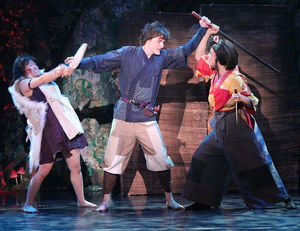 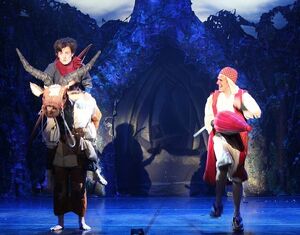