Prince Edward, also simply known as Edward, is the tritagonist from Disney's 2007 feature film Enchanted. He is both voiced and portrayed by James Marsden, who also portrayed Cyclops in the X-Men franchise, Fred O'Hare in Hop, and Tom Wachowski in the Sonic the Hedgehog film series, and voiced Diggs in Cats & Dogs: The Revenge of Kitty Galore.

When we're first introduced to Edward, he's an adventurous young man "hunting trolls" with his assistant, Nathaniel, where he confesses that he's actually tired of an active life and wants to settle down.

After rescuing Giselle from a troll he declares that they "will be married in the morning". After Giselle is "banished" to New York, Edward follows with the intent of rescuing her but is unprepared for the urban environment of New York City. He threatens a construction worker believing the man has knowledge of Giselle's disappearance.

He disrupts traffic by jumping atop a bus and "slaying" it with his sword (thinking it's a "steel beast", which leaves its driver in fury, which is an emotion rare to the citizens of Andalasia), refers to every citizen as a "peasant", gets hit by bicyclists when he breaks into song, mistakes a television for a "magic mirror", and misinterprets Pip's warnings.

After finally finding Giselle, he's perplexed that she doesn't harbor the same feelings she had for him earlier but agrees to go on a "date" with Giselle which ends with them going to the "King and Queen's Ball". However Narissa, Edward's stepmother appears from Andalasia and tries to kill Giselle. Edward finally learns of Narissa's true evil nature and threatens to take her back to Andalasia, put her on trial and strip her of her crown.

After Pip defeats the evil queen (who transformed into a dragon and made off with Robert, the man Giselle fell in love with) Edward goes back to Andalasia with Nancy Tremaine, a former fiancée of Robert, and they get married.

Edward is handsome, brave but a little clumsy when he enters New York City. He is set on his goal to find and bring Giselle back home to get married and presumably live happily ever after. 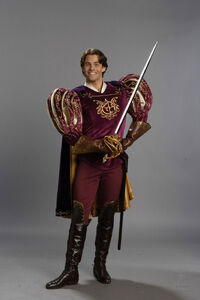