Princess of the kingdom of Soleanna

Be in love with Sonic by hugging and kissing him

Continue to lead and rule the kingdom of Soleanna

Princess Elise the Third is a major character in the video game, Sonic the Hedgehog (2006).

Princess Elise is a beautiful young woman who is the princess and the current sovereign of Soleanna, being the last surviving member of the once-great royal family that rules the city and its kingdom.

The daughter of the Duke and Duchess of Soleanna, Elise grew up with a tragic past-at an early age, she lost her mother and not long after she was made the vessel to seal the monstrous Iblis by her father, which claimed his life too. Torn between her impetuous whims and duty, Elise rose to leadership with the mysterious heavy burden given by her father when he died: she could never let herself cry or Iblis would be released from within her.

She was voiced by Lacey Chabert in English, who also voiced Eliza Thornberry in The Wild Thornberrys, Aleu in Balto II: Wolf Quest, Meg Griffin in Family Guy (Season 1 only), and Vitani as a cub in The Lion King II: Simba's Pride and portrayed Gretchen Wieners in Mean Girls, and by Maaya Sakamoto in Japanese, who also voiced Ling Xiaoyu in Tekken, Aerith Gainsborough in Compilation of Final Fantasy VII, Lightning in Final Fantasy XIII trilogy, and Lisa Hamilton in Dead or Alive.

When Elise was seven years old, she was with her father, the Duke of Soleanna, when he tried to extract energy from the sun god of Soleanna, Solaris. The experiment accidentally splits the deity in two entities, but the Duke manages to transfer one half, Iblis, into Elise. He then tells her that she must never cry, as that would release the destructive Iblis, also known as the "Flames of Disaster."

In the present time of the game, Elise celebrates the Festival of the Sun in Soleanna. Doctor Eggman then attacks the city and kidnaps Elise, out to get her Chaos Emerald and the power of the Flames of Disaster locked inside her. Sonic the Hedgehog quickly chases after them. Elise is later killed when the Egg Carrier explodes, but Sonic and Silver use Chaos Control to go back in time and save her.

In the "Last Story", Sonic is killed by Mephiles, the other half of Solaris. Elise breaks down and cries, releasing Iblis, who fuses into Solaris with Mephiles. After Sonic's friends find the seven Chaos Emeralds, Elise uses their powers to heal Sonic, and with the help of a kiss from Elise, Sonic became healed as Super Sonic (Elise heals him with the seven Chaos Emeralds), and then Super Sonic gives some of his power to Shadow and Silver, transforming them into Super Shadow, and Super Silver. After Solaris is destroyed by Super Sonic, Super Shadow, and Super Silver, Sonic and Elise go back in time to when Solaris was just a flame. Elise takes the flame and tells Sonic that if it blows out, the flame that will become Solaris in the future, it will result in her and Sonic never meeting. Though she doesn't want their friendship to end, Sonic convinces her to abandon their meeting. With tears in her eyes, Elise gently blows out the flame, which removes Solaris from existence, thus erasing the whole game's events and happenings. Afterwards, the timeline changes so she is never kidnapped, and never meets Sonic. All the events of the game never happened. 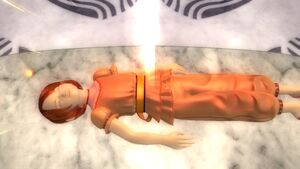 Princess Elise as a child 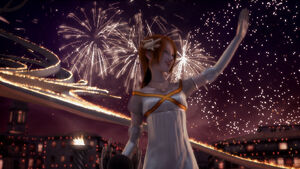 Princess Elise attending the Festival of the Sun 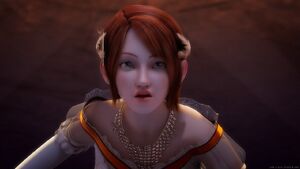 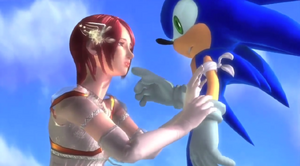 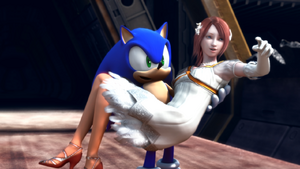 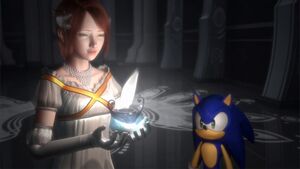 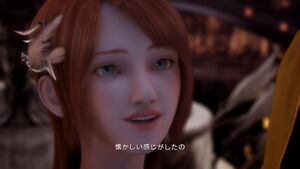 "It felt so... familiar somehow"