Stop Crystal from forcing her to captured Ken and marry him (succeeded).

Princess Graciella is a reformed secondary antagonist in the 2011 animated film, Barbie: A Fairy Secret. She is the princess of Gloss Angeles and a strong Passion Fairy. Under the influence of a love potion, Graciella kidnaps Ken after Crystal, one of her assistants shows him to her.

She was voiced by Alexandra Carter.

On the day of the première, Crystal takes the photos of Ken and others. She brings back to Princess Graciella and gives her a love potion and shows her the picture of Ken which she took and she falls in love with him on the spot. The next day at Wally's restaurant, Barbie confronts Raquelle. While the two are arguing, Princess Graciella, Crystal, and two assistant fairies show up and kidnap Ken. Carrie and Taylor, the two fairies who were sprout their wings and attempt to stop the Princess from taking Ken, but the portal to Gloss Angeles closes before they can enter it. The stylists attempt to dissuade Raquelle and Barbie of the fact that they just saw fairies but admit their existence. Meanwhile, in Gloss Angeles, Ken and the Princess arrive in the royal palace, where they meet Prince Zane, Graciella's boyfriend. Zane is outraged, at Graciella's new love interest challenges Ken to three duels.

Barbie and her friends travel to Gloss Angeles and that eventually heading on the palace, the four locate Graciella, Ken and Zane. Barbie flies in front of Ken to stop Zane from blasting him and Barbie attempts to give Graciella the love potion antidote, but the Princess freezes her, Raquelle, Ken, Carrie, and Taylor. Crystal reveals that Carrie and Taylor are in the palace, and Graciella (who previously banished them) sends the four to the dungeon by trapping them in Fury Spheres which is said to be escape-proof. The wedding begins, as Barbie and Raquelle sit down and talk, so in finally getting the bottom of their rivalry and misunderstanding. They apologize to each other and promise to become friends. Their forgiveness transforms the prison of a fury sphere to the freedom of real wings for them because forgiveness lets you fly.

The two fly up to the grand hall to rescue Ken with their new wings. They stop the wedding just in time, revealing to the public that the Princess is under the influence of a love potion. Raquelle distracts the assistant fairies while Graciella battles with Barbie. Barbie eventually releases the antidote over Graciella's head, curing her of the love potion. The Princess confronts Carrie and Taylor, who revealing that they spend time without her because she was so busy with royal duties she was never free even though they stopped inviting her to do things with them they were sure she would say "no" so they never tried inviting her to do things with them. The three forgive each other and become friends again. Crystal reveals that she made Graciella fall in love with Ken so she could get Zane's attention.

Graciella, who confiding to Crystal that the ordeal was all her fault, sentences her to clean the entire palace after the wedding reception, stating that she and Zane were to get married to Carrie, Taylor, Barbie, and Raquelle as her bridesmaids. Graciella tells Barbie and Raquelle that their wings will disappear when they go back to the human world, and then reappear when they return to Gloss Angeles. But Raquelle did not promise Graciella that she'll keep Gloss Angeles and fairies existence a secret. Thus, the fairies blow a magic sleeping dust on them. The next morning, Barbie wakes up with no recollection of Gloss Angeles or the fairies, thinking it was a dream. However, she and Raquelle are now friends. Carrie and Taylor tell the two that they reconnected with an old friend and are going back to their home town (Gloss Angeles).

Graciella has pink hair with a silver tiara, blue eyes, and wears a silver necklace and a pair of earrings. Under the influence of a love potion, however, her eyes are purple (as her blue eyes were mixed with the color of love, violet). She has light skin and she spends the entirety of the film in a pink dress and silver heels, but at the wedding, she wears a white wedding dress. She has pink wings.

She is sweet and nice, but under the influence of a love potion, she becomes jealous, mean, and obsessive. She is a passion fairy and her emotions are strong.

She is a Passion Fairy. According to Reena, her true emotions are incredibly powerful and get stronger when she is angry. 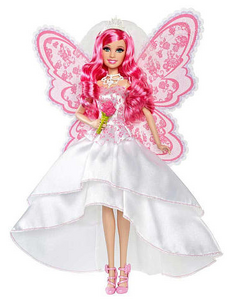 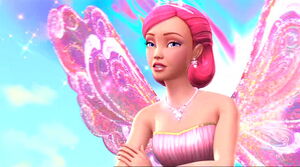 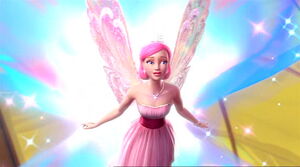 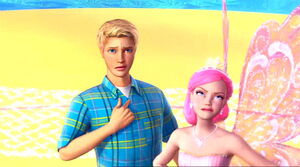 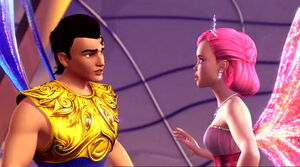 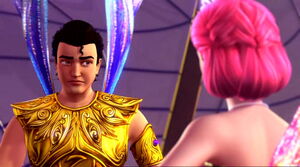 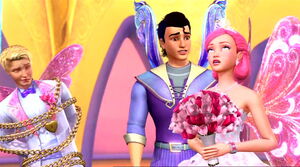 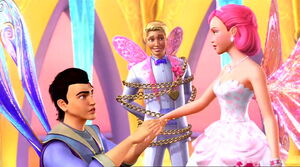 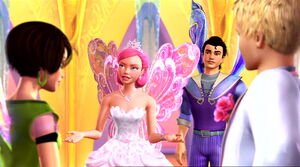 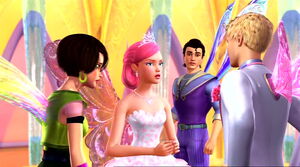 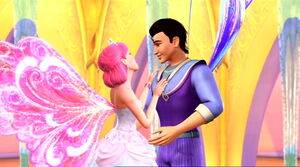 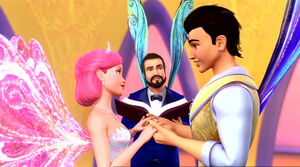 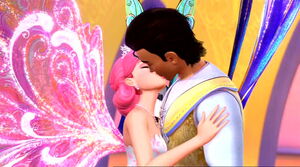 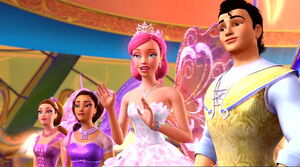 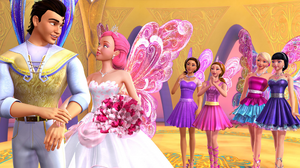 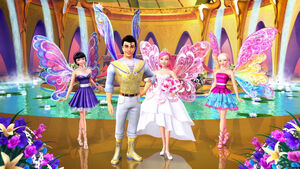 Retrieved from "https://hero.fandom.com/wiki/Princess_Graciella?oldid=2315845"
Community content is available under CC-BY-SA unless otherwise noted.